Vice Ganda responded to JooE whom she considers her anak. 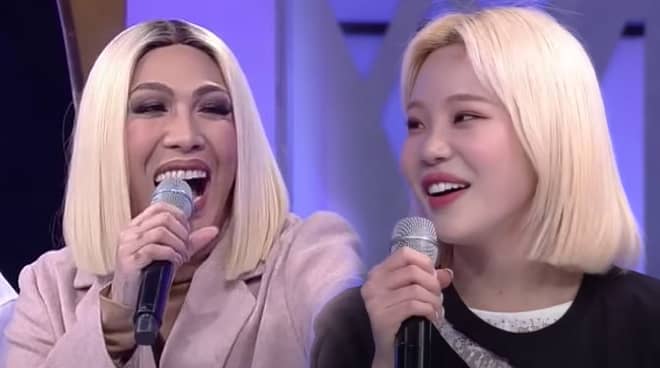 JooE of K-Pop group Momoland — known for being close to Vice Ganda — left a message for the comedian during a Facebook Live session.

The K-Pop singer, who has been visiting the Philippines in the past two years for promos and tours, has undoubtedly developed a solid friendship with the Kapamilya star. And proof of that is how the two celebrities call each other: JooE calls Vice her “mommy” while Vice calls JooE her “anak.”

So when a fan asked JooE if she knows Vice Ganda, the K-Pop star’s eyes lighted up and said: “Vice Ganda, my mommy, I love you.”

Vice Ganda, for his part, responded to JooE by quoting a fan’s tweet and saying he misses her, too.

During the six-piece K-Pop group’s appearance on the show, Vice asked the girls to try Filipino dishes, among others. Watch the highlights from the said GGV episode below:

Momoland rose to fame in the Philippines due to the massive success of the viral hit “Bboom Bboom.” In 2019, the South Korean girl group signed a contract with the Kapamilya network.