G-mik Cast: Where Are They Now? | Push Pins

Remember G-mik? It was the late 90s to early 2000s youth-oriented show top-billed by the finest young artists of their time. Almost two decades after the show ended, these stars have each chosen their 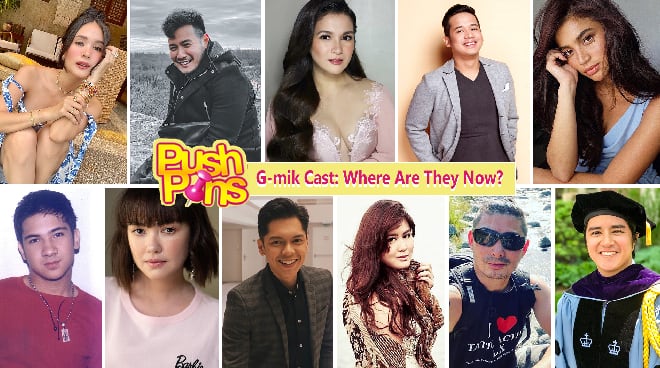 Remember G-mik? It was the late 90s to early 2000s youth-oriented show top-billed by the finest young artists of their time. Almost two decades after the show ended, these stars have each chosen their own paths.

Camille Prats, who played Roni, continues to thrive in the showbiz industry. In 2008, she tied the knot with Anthony Linsangan and had one son. Anthony, however, passed away in 2011.

Later in 2017, Camille got married to her second husband VJ Yambao. They have two kids together.

Angelica Panganiban played Jelai in the series. Over the years, Angelica has received major roles in TV and film. Up until today, her career continues to flourish and she has remained an A-list actress.

John Prats, who played Yuan, also remains in the showbiz industry to this day. In 2015, he got married to actress Isabel Oli. John is now a proud dad to two children.

Carla Aquino played Junjun in the show. Like the others, Carlo also continues to thrive in the industry. After the show, he has received several major projects in the Kapamilya network. His last TV appearance was in the drama A Soldier’s Heart earlier this year.

Not long after the show ended, Stefano Mori, who played Borj, chose to stay out of the limelight and lead a private life. He is now a successful businessman who runs a restaurant.

Miko Samson, who played Tonsy, also chose to lead a private life. After leaving the spotlight, he pursued his studies and finished BS Management Engineering at the Ateneo de Manila University. He also went to Ateneo Law School. Later in 2017, he graduated from Columbia University, an Ivy League school in New York.

Miko is now a practicing lawyer abroad and in a happy relationship with his girlfriend Zilfa Libarnes.

Anne Curtis played Apple in the series. From a darling teen, she has become one of the country’s “It Girls” and has also been dubbed as the “Pambansang Sweetheart.”

Over the years, Anne has proven herself not only as a seasoned actress but also an excellent host. For many years now, she’s been gracing our noontime TV as part of ‘It’s Showtime.’

In 2017, she tied the knot with Erwan Heussaff and they now have a daughter together.

Heart Evangelista, who played Missy Sandejas, also continues to be an A-list actress to this day. In 2015, she got married to former senator Chiz Escudero.

Aside from her thriving career in showbiz, Heart has also become quite popular and well-loved in the digital world as she gives a sneak peek of her life through her YouTube channel and social media accounts.

Danilo Barrios, who played Basti, was also part of the all-male dance group Streetboys back in the days. After G-mik, he continued to flourish in the industry but eventually decided to disappear from the spotlight. He is now living with his wife, Regina Soqueño, and their children in a farm.

Janus del Prado, who played Epoy, also remains active in showbiz. He has received roles in TV and films throughout the years and last appeared in the 2019 drama Starla.

He also recently ventured into business and runs an online pastry shop.

Angelene Aguilar, who played Bea Aguilar, appeared in a few shows in the Kapamilya network after G-mik. She eventually left showbiz to pursue her Fine Arts studies. She is now a jewelry designer in New York City.

Learn more about them by watching this video:

Who among these G-mik stars is your favorite?