‘Bagets’ Cast: Where Are They Now? | Push Pins 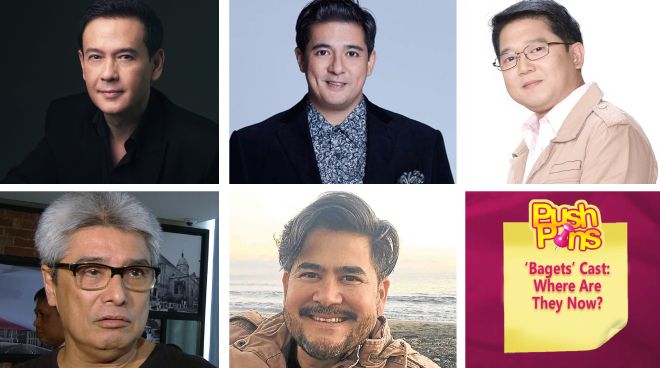 Once in a while, a movie comes along that defines a generation. For ‘80s kids, that movie was Bagets. The teenage drama-comedy film was groundbreaking for its time, tackling themes that were sure to raise eyebrows back in the day. It also started a fashion trend with layered clothes and shocking color combinations.

And the stars of the Bagets? They’ve come a long way since wearing those layered shirts and mix and match Chuck Taylors.

William played the role of Tonton, the kuya of the group. While he’s the eldest one in their barkada, he still had a bit of growing up to do especially when it came to relationships.

Then 21-year-old William met just-turned-16 Yayo Aguila on the set of Bagets. He and Yayo got married, had four kids, and eventually separated after 25 years. William suffered a stroke some years ago but slowly got back into showbiz. Earlier this year, he became part of the cast of the film Mia alongside his ex-wife.

JC played Topee, the son of a movie star mom who had little time for him. Maybe he was searching for a mother figure, which is why he ends up in the arms of a much older woman.

JC had a successful career after Bagets, but it didn’t last long. By 1987, JC left showbiz when he got involved in alcohol and drugs, and he found the need to search for a deeper meaning in life.

JC became a pastor based in London and got married to a British woman, with whom he has children. He then moved to the US in 2011 and now works as a hospice chaplain and spiritual counselor.

Herbert played Gilbert, a boy from a lower middle class family whose very enterprising mother would sell anything and everything to make an extra peso. He dreams of the girl next door and hopes to win her heart.

Herbert managed to parlay his showbiz career into a fruitful political one. Starting out as part of youth organizations, he eventually made his way to vice mayor then mayor of Quezon City. He finished his term as a mayor in 2019.

Earlier this year, Herbert appeared in the drama series Make It With You.

Then 14-year-old Aga played Adie who also had a dalliance with a much older woman. In one of the movie’s most iconic scenes, he learns the value of giving a foot massage in—of all places—a swimming pool.

Bagets was the movie that launched Aga’s career. His be-dimpled smile, good looks, and dance moves launched a few more successful teen-oriented films before he took on more mature roles. In 1986, he became a father at 17 after it was revealed that he had gotten Janice de Belen pregnant.

In 2001, he tied the knot with his wife Charlene Gonzales and they have two kids together. Aga’s career continues to flourish, and he has remained an A-list actor to this day.

Raymond played Arnel who loves classic movies and musicals. He’s a rich boy who falls in love with a girl from the wrong side of tracks.

Raymond’s career steered into a more musical direction, releasing several albums. He also sang one of the most popular songs from the Bagets soundtrack, “Farewell,” which has become a theme song of sorts for graduation ceremonies. He continues to perform in shows here and abroad.

Raymond also recently got into the arts and has been practicing woodcarving.

Who is your favorite 'Bagets' star?