‘It makes me proud’: Robi Domingo lauds doctor-parents — both seniors — for serving amid pandemic

Although he fears that his parents might contract the coronavirus (COVID-19) disease, Robi Domingo said he couldn’t be any prouder of both of them. 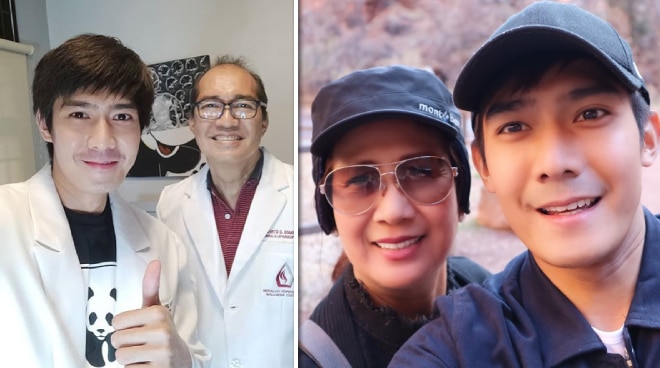 Despite fears for his parents — who are both senior citizen doctors serving amid the ongoing health crisis — to contract the coronavirus (COVID-19) disease, Robi Domingo remained resilient knowing both of them are doing it for the country.

In Star Magic’s special collaboration with Metro.Style called Love from Home Lockdown Portraits, Robi opened up about his own story of love, hope, and purpose as he faced the dilemma of allowing his parents to fulfill their duty despite his fears as a son.

To all the medical students of Dr. Domingo, better get ready because he's got a special guest. 😅 #WorkFromHome Having parents who are both doctors, I understand where our frontliners are coming from. I want to let you know that I appreciate your dedication and commitment. Mabuhay kayo! 👍🏻

According to Robi, he had several realizations during the pandemic including feeling as if he won Pinoy Big Brother where he placed first runner-up during the Teen Plus edition of the reality competition back in 2008.

“During quarantine, it really defined and redefined my concept of home. I mean, every single day you would wake up to same faces. It was as if I was thrown back to Pinoy Big Brother. But this one is different. Because unlike PBB, you can’t nominate people to go out. And there is no scheduled time frame for the Big Night,” he said.

But Robi also had his fair share for personal fears as his parents decided to serve go to the front lines and serve those in need of medical help.

While he and his sibling have better chances of survival if ever they contract the virus, he worries about his parents who are both seniors.

“I have to be honest. This pandemic became personal to me and my family more just because my family are both doctors. So every single time they go out of the house to treat patients, to fulfill their promise as doctors — it gives me that sense of fear. If they go home — and knock on wood — my brother and I get the virus, I mean I could survive. But you know, having them as seniors and having them as frontliners that makes me so proud. But intertwined with that feeling is the sensibility and that fear,” he said.

With Robi having a number of friends who are doctors, he couldn’t help but feel proud of them for choosing to serve during these trying times.

“I got to talk to lots of frontliners because maybe in an alternate life, that would have been my work. I could have been a doctor just like my parents. And you know, talking to my friends who are really, really exhausted with work — I mean I ask my doctor friends and they were telling me ‘this is something that we signed up for,’” he said.

He added: “It may be hard, I would do conference calls with them, I would call them, they would just cry. But at the end of the day, they have to wipe their tears and they have to fulfill their duties as doctors. And for that one, I’m just really, really proud to call them my friends.”

Robi Domingo has been with Star Magic — ABS-CBN’s talent management arm — ever since his post PBB days.