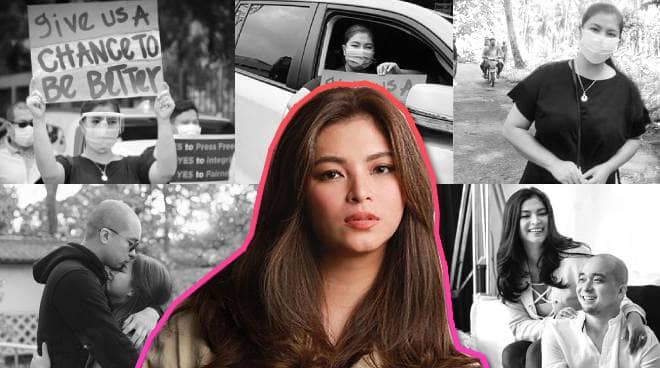 Without a doubt, Angel Locsin is one of the most brilliant actresses in the country today. To add to that, she also has one of the most beautiful faces in showbiz. Truth be told, there’s more to Angel than meets the eye as she uses her platform as a celebrity to stand up for the oppressed and help without asking anything in return.

One of the biggest celebrities at the forefront of COVID-19 relief efforts, Angel has gone beyond her celebrity status and proven that she is both a real-life superhero and an angel sent from above.

Through a fundraising initiative called “Shop & Share” with her fellow Kapamilya celebrities, she has provided testing kits to hundreds of Filipinos. Prior to that, she also raised nearly 11 million in donations to set up tents at overcrowded hospitals across Metro Manila.

READ: Angel Locsin is selling one of her cars to raise funds for COVID-19 mass testing

But even before this, Angel has been known for her various philanthropic acts — silently extending help during calamities and strongly supporting various causes of one charitable organization after another.

In fact, Angel was among the celebrities who led the way when the country was hit by Typhoons Ondoy and Yolanda, Mindanao Quakes, and the Taal Volcano eruption, among other natural disasters over the past couple of years.

When Typhoon Yolanda devastated the Philippines in 2013, Angel put up for auction her 1970 Chevrolet Chevelle — a classic muscle car she described as her “dream car” — to raise funds for typhoon-stricken victims.

In 2019, she was named as Forbes Asia’s Hero of Philanthropy — a testament to her various heroic acts throughout the years.

Unknown to many, Angel was supposed to be launched as part of ABS-CBN’s Star Circle Batch 9 in the early 2000s. But sadly, it did not push through as her father opposed the idea of her joining showbiz.

But it seemed Angel was meant to be a star as she signed with GMA Artist Center a few years later and starred in various successful shows which skyrocketed her to fame including Mulawin and the TV adaptation of Darna.

In 2007, Angel made a big move to ABS-CBN and went on to shine even brighter as she starred in some of the most acclaimed TV shows on local television. This includes her first teleserye with ABS-CBN — Lobo — which earned her an International Emmy Award nomination.

A year later, Angel starred in the local remake of the hit South Korean drama Only You alongside Diether Ocampo, Iya Villania, and Sam Milby.

Due to the success of Lobo, she reprised her role as Lyka Raymundo-Ortega in Imortal— another fantaserye success.

But Angel earned praises when she proved her versatility as an actress for her role as Monica Santiago-de Villa in The Legal Wife back in 2014.

Angel’s success translated to the big screen as she starred in numerous blockbuster films including In The Name of Love, Unofficially Yours, One More Try, Everything About Her, and The Third Party, among others.

Throughout her career, Angel earned various accolades and recognitions for her works in both television and film.

The Guillermo Mendoza Memorial Scholarship Foundation (GMMSF) Box Office Entertainment Awards alsne gave her various awards from 2005 to 2020 which included two Movie Actress of the Year awards for In The Name of Love and One More Try.

From 2006 to 2013, the Anak TV Seal Awards has named Makabata Star Awardee for eight consecutive years — eventually giving her the Makabata Star Hall of Fame in 2014.

For her early philanthropic efforts, Angel received the Outstanding Youth Leadership Award from the UN Youth Association of the Philippines.

Research and Data and Analytics organization YouGov also named Angel Most Admired Woman in the Philippines.

Throughout her nearly two-decade career, Angel also received awards from the FAMAS, the Entertainment Editors EDDYS Awards, Edukcircle Awards, the Film Development Council of the Philippines, Gawad Pasado, Gawad Tanglaw, and several others including from various schools and universities across the country.

Angel has been paired with some of the most talented actors throughout her career. But she was most notably known for her team up with Richard Gutierrez whom she worked with on various projects back when she was still with GMA-7. In fact, #ChardGel was one of the biggest love teams in the mid-2000s.

READ: Richard Gutierrez has a message for Angel Locsins bashers

But just when fans thought Angel and Richard could no longer reunite and work together again, the former onscreen couple brought hope to fans when the latter decided to transfer to ABS-CBN in 2017. Luckily for fans, the two worked together in the third installment of the fantasy-drama Lobo titled La Luna Sangre that starred Kathryn Bernardo and Daniel Padilla.

Angel’s move to ABS-CBN also meant one thing: fans could expect to see her working with some of the biggest actors in the country. As soon she joined the Kapamilya network, she worked on back-to-back projects with prime Kapamilya actor Piolo Pascual.

After doing the teleserye Lobo with Piolo, Angel did her first big-screen project under Star Cinema titled Love Me Again with the hunky actor.

Angel and Sam’s project was Only You back in 2009. The two reunited in 2016 for Jason Paul Laxamana-directed film The Third Party.

In 2010, Angel top-billed the sequel to Lobo— Imortal— with John Lloyd. Two years later, the two stars reunited for a big-screen project titled “Unofficially Yours.”

Angel and Zanjoe, who worked together in 2012 via the Star Cinema film One More Try, reunited four years later in The Third Party.

Angel and JC impressed viewers with their characters on the top-rating Primetime teleserye The Legal Wife back in 2014. Five years later, the two stars reunited via Angel’s comeback drama, The General’s Daughter.

Angel Locsin and other Kapamilya actors

Angel’s stint as a public figure allowed fans to know almost everything going on in her life — including her relationships.

In 2003, Angel’s much-publicized relationship with Click co-star Miko Sotto quickly came to an end after the latter’s sudden death. But even up to this day, Angel never fails to remember the late star.

Angel has also been romantically involved with Miko’s first cousin, Oyo Sotto. While Angel and Oyo faced scrutiny from the public for their relationship, the couple managed to dodge the issues thrown at them.

Angel and her Mulawin co-star Dennis Trillo were once rumored to have taken their onscreen pairing into real life. The latter, in an interview, said he and the actress did not deny anything - making fans think that somehow, there's some truth to it.

What started with a tweet asking Angel to be his Valentine's date turned out to be an unimaginable feat for Azkals player Phil Younghusband as he eventually captured the heart of the award-winning actress. In 2013, the two broke up.

Angel and Luis had been in an on-off romance between 2008 and 2016. The couple, who first went out on a date in 2008, eventually ended the first shot at their relationship the following year. In 2014, the two got back together but eventually put an end to the romantic involvement between them for good in 2016.

Having been friends for seven years, Angel and Neil eventually became a couple. The two confirmed their relationship in 2018. A year later, the Kapamilya actress got engaged to the film producer.

Despite the non-stop bashing she has been receiving online, Angel chose to stand up for the employees of ABS-CBN who were laid off from the company due to the non-renewal of the media giant’s franchise.

In a noise barrage held outside ABS-CBN headquarters last July 18, Angel called out her fellow Kapamilya celebrities who stayed silent amid the network’s battle for a new franchise.

Right now, Angel Locsin continues to inspire the Filipino through the docu-reality show Iba ‘Yan which airs on the Kapamilya Channel every Sunday.