SB19’s ‘Get In The Zone’ album entered the chart just hours after it was released. 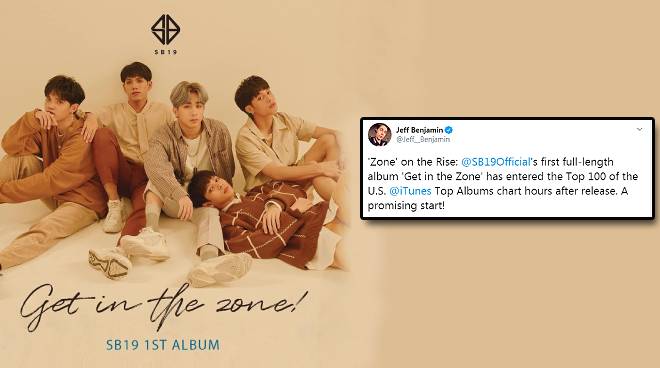 SB19 is off to a great start with their new album "Get In The Zone" after it entered the Top 100 of the US iTunes Albums chart.

'Zone' on the Rise: @SB19Official's first full-length album 'Get in the Zone' has entered the Top 100 of the U.S. @iTunes Top Albums chart hours after release. A promising start!

“'Zone' on the Rise: @SB19Official's first full-length album 'Get in the Zone' has entered the Top 100 of the U.S. @iTunes Top Albums chart hours after release. A promising start!” Billboard’s K-Pop columnist Jeff Benjamin tweeted.

According to the group, the album is the coming together of what they have learned throughout the years.

“It hasn’t been long since we released our debut single 'Tilaluha,' but prior to that, we have been training for years already. We wanted to incorporate all the things that we have experienced during trainee days into this album by putting all the emotions that we went through into our music. It was an emotional rollercoaster, but we pulled through and we hope that we get to inspire people with our story," Sejun said in a report by One Music PH.

The group wrote the lyrics for the songs themselves and worked with Korean producers to create the tracks.

“It’s a great thing to get all the good traits from Korean and Philippine music/culture, and put them together into one. If you’ll dive deep into it, you’ll find a whole new sound rich in both cultures," Sejun remarked.

On their message for their fans, Josh said,  “All our achievements to date would not have been possible without you. So in return we will work harder and continue to uplift you with more music and content so that we can give back the love we’ve received from you.”

SB19 Get In The Zone Billboard