WATCH: Leon and Claudia Barretto open up about how quarantine brought them closer as siblings

Leon and Claudia Barretto delve into their relationship as siblings growing up. 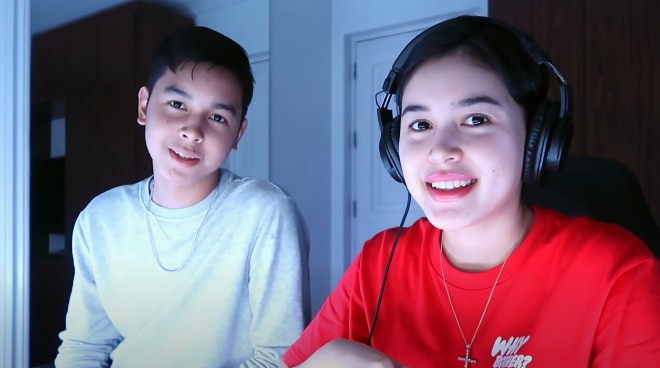 In the latest episode of Claudia Barretto’s podcast Mindgames, the younger daughter of Marjorie Barretto had her little brother Leon as a guest on her show that tackles mental health.

While the two delved into several topics including their routine during the quarantine and Leon’s aspirations for college, it’s interesting to know how their relationship as siblings changed over the past three months.

Leon, for the most part, noted how his sister — a person he looks up to — remained almost the same person, only better.

“You were always the same — even up to this day. You’re very smart, you’re very intelligent, you’re very responsible, you’re very organized and all of those things. I think the only thing different is that we were just kids. But she remains basically still the same person. You just grew better,” Leon shared.

Claudia, on the other hand, admitted that she was quite temperamental growing up — a trait she identifies the most with her brother.

“I think when I was younger I had some temperamental issues, for sure. We would just always be angry because we were similar in that aspect it would always be the two of us fighting,” Claudia stated.

But according to Claudia, she eventually learned how to handle her emotions better as years went by.

“I think that’s what changed for the most part. I mean I grew up and learned how to handle that. But also that was I think an effect also of my two conflicting selves — who I was around family and who I was around other people,” she stated.

She went on: “I think it made it difficult to not be frustrated about a situation like that growing up. From then to now, it’s just really the maturity of like being able to handle my emotions better.”

Admitting that he has developed a sense of mutual understanding with his big sister, Leon, now 17, shared how much he has learned from his big sister.

“I just have this mutual understanding as of Claui right now which I’m very glad. We were able to develop that in quarantine. I learned so much from my sister — especially Claui. And every time we have discussions or just basically talk about random topics, I learn something afterwards after our talks,” Leon said.

The “Stay” singer, who feels happy about having been able to impart something to her brother and youngest sibling Erich, admitted to having learned a lot from her older sisters Dani and Julia as well.

“I think that’s important. I think that’s all I can really wish for you and Erich ‘cause you’re both younger than me. I definitely have learned things from Dani and Julia as well that I have taken with me and really utilized in my own life,” she shared.

Revealing how her admiration for her little brother grew stronger, she said: “For me, my admiration for you changed obviously ‘cause I saw you grow up and then you know, people don’t know this but he’s also very, very organized. He likes to keep things like really tidy.” To which Leon responded: “Which I learned from her also.”

Leon and Claudia are two of Marjorie Barretto’s five children.