Joshua Regala also shared a duet with his frontliner mom — a nurse who works in Ireland— on stage. 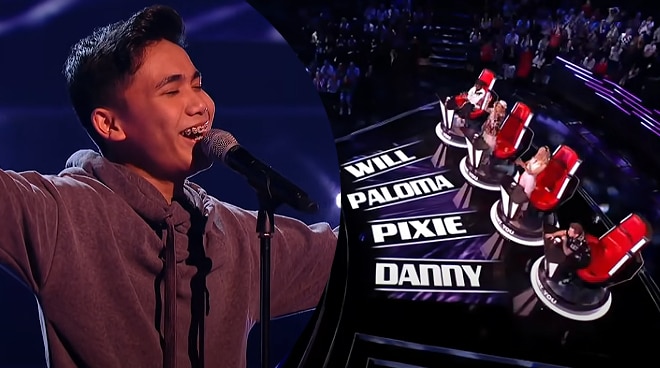 Joshua Regala, a 15-year-old Filipino singer who hails from the town of Navan in County Meath, Ireland, got four chair turns during the blind auditions for the fourth season of The Voice Kids UK.

John, who sang English singer Calum Scott’s “You Are The Reason” on the show, instantly got will.i.am, Paloma Faith, Danny Jones, and Pixie Lott hooked with his performance.

Right after his performance, one of the judges on the show — Paloma Faith — asked Joshua’s mom to join him on stage for a duet.

While his mom was hesitant at first, she eventually walked up the stage and performed the same song which gave the judges goosebumps.

No less than Calum Scott — the singer behind the song he performed on the show and a product of a singing competition himself — praised Joshua’s performance on the show.

He wrote: “Still mad to hear my song being performed on auditions, total full circle! Massive congratulations Joshua on such an amazing performance last night.”

According to Calum, his song climbed to number 17 on the iTunes charts right after the blind auditions. He stated: “Brucey Bonus.. we back at #17 on @itunes today!”

Massive congratulations Joshua on such an amazing performance last night 🖤 Brucey Bonus.. we back at #17 on @itunes today!! 🤯😏 🎥 @thevoicekidsuk @pixielott

In a separate Instagram post, the 15-year-old singer thanked Calum for giving him kind words and admitted that he’s still on cloud nine right now.

“Once again thank you @calumscott so so much for posting my blind audition. Still cant believe that this is real,” he wrote.

Once again thank you @calumscott so so much for posting my blind audition. Still cant believe that this is real.🤯❤🔥 Tag him down below😉 #calumscott #thevoicekidsuk #singing #youarethereason #pinoy

According to an article published on the Sunday World newspaper which Regala shared himself on Instagram, his mom is a nurse working at the Dublin Connolly Hospital in Ireland named Marcisa Regala.

In the same article, Joshua revealed that he was headhunted for the show which admitted to having thought as a scam at first.

“I guess I was scouted. I think they found one of my videos on Facebook. I won a competition called Teen Stars Ireland back in 2019, and I think they found the video clip of the final where I sang “Bruises” by Lewis Capaldi,” he said.

He added: “They contacted me last summer and we thought it was a cam because we couldn’t believe our eyes that it was The Voice UK contacting us. But after we talked to them I realized it was genuine and I was so excited.”

Joshua, who also happens to be the lead vocalist of a band at a local church called Lighthouse Community Church, is now part of Pixie Lott’s team on the show.

Currently, Joshua’s performance and duet with his mom on ‘The Voice,’ respectively, made it to the the 49th and 35th spots on YouTube Philippines’ top trending videos.

Meanwhile, The Voice Teens in the Philippines, now set to head to the Knockout rounds, airs on Kapamilya Channel every Saturdays and Sundays.

Hosted by Luis Manzano and Alex Gonzaga, The Voice Teens’ coaches for this season are Apl.de.ap, Lea Salonga, Sarah Geronimo, and Bamboo.