Bea Alonzo said her fans received offers to have her fan pages sold to suspicious individuals. Sharing screenshots of messages sent to her by fans telling her about the suspicious offers they received, Bea said she remains baffled as to why people would offer to buy her social media pages.

The actress wrote: “Had to post this. Woke up to these messages from my supporters. I wonder why these people would offer to buy these accounts all of a sudden? For what?”

Bea went on to say that she wasn’t the only Kapamilya artist who had received an offer from the anonymous individuals.

“Also heard that (different) fan groups of (different) ABS-CBN artists received the same offer today. You be the judge,” she stated.

Meanwhile, some of the supporters managing her fan accounts admitted to being convinced that trolls (paid individuals managing fake accounts) are behind the propositions to buy her social media pages.

One of her supporters said: “Hi, Ms. bea! Inform lang po kita na most of your fan community threads have been receiving offers to seell their accounts.”

The fan added: “I think trolls po are doing this to make their lives easier and get more money. Don’t worry, Ms. bea. We will never leave you. Laban hanggang dulo! We love you!”

I read somewhere that when you smile, your mood actually improves. Even when you think things aren’t going your way, when you smile, the muscles in your face are sending signals to the emotional centers of your brain that everything is good. So, even if it’s not, it will be soon 😊 . . . make-up @tingduque hair @hairbybrentsales 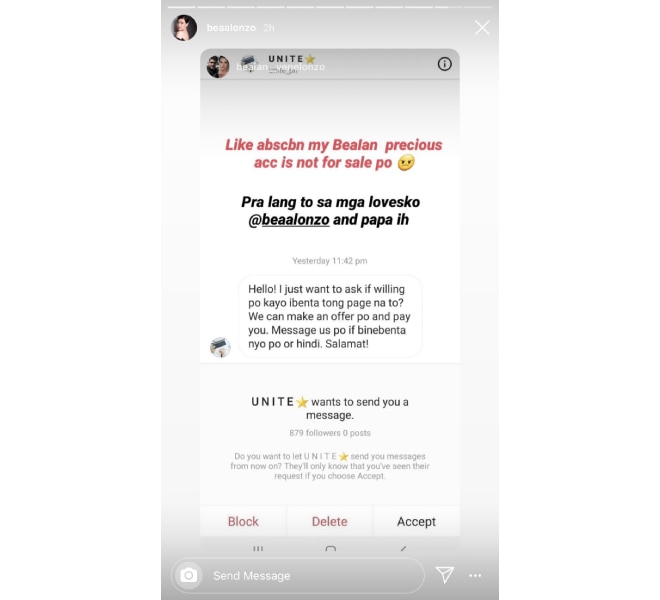 Bea, one of ABS-CBN's prime celebrities, started her career in showbiz in 2002. She went on to star in various top-rating Kapamilya shows and blockbuster films throughout her nearly two-decade career in the industry.