Jennylyn Mercado shared that the lowest point of her life taught her so much about empathy. Jennylyn Mercado opened up that she once lost everything and the experience shaped the values that she possesses right now.

The actress has been very vocal about her support for the embattled employees of ABS-CBN, who are going to lose their jobs in the middle of the pandemic following the denial of the network’s franchise by the House committee.

Jennylyn remarked that the said phase in her life taught her essential life lessons.

“Those experiences shaped the person that I am now. And through those experiences I learned that kindness, patience, and empathy is what makes people human,” she relayed.

Those experiences shaped the person that I am now. https://t.co/GBDjBItEmy

That tough time turned around when she was given a second chance by her network.

“Sinundo ako ng manager ko at bumalik kami dito. Tapos binigyan ako ng second chance ng GMA. And I tried (and am still trying) to make the most out of it. Kaya I will always be grateful sa kanila,” she wrote.

Recently, the actress lambasted those who are rejoicing the closure of ABS-CBN.

The actress added, "Hindi ba na tinuruan tayo ng ating mga magulang na maging makatao sa kapwa? Rejoicing because of other people’s sorrow is not only wrong, but inhumane. You are cruel."

Jennylyn also urged the netizens to show compassion and to not turn a blind eye on the sufferings of others.

READ: Jennylyn Mercado to people rejoicing ABS-CBN being denied a franchise: 'You are cruel'

She also stood firm about her right to free speech after a netizen tried to suggest that she stop giving out her opinion about ABS-CBN. 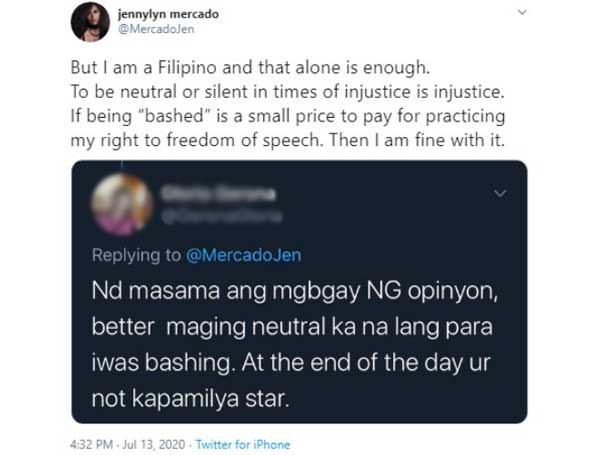 "I am a Filipino and that alone is enough. To be neutral or silent in times of injustice is injustice. If being ‘bashed’ is a small price to pay for practicing my right to freedom of speech. Then I am fine with it," she stated.