Young singer Frankie Pangilinan on Monday, July 13, alleged that a group of “FB boomers” are planning to oust her father, Senator Francis “Kiko” Pangilinan, from his post as chairman of the Senate Com Young singer Frankie Pangilinan on Monday, July 13, alleged that a group of “FB boomers” are planning to oust her father, Senator Francis “Kiko” Pangilinan, from his post as chairman of the Senate Committee on Constitutional Amendments.

Sending off Frankie to her new school for her first day in College! Brought a bike with me❤❤💔💔💔❤❤

In a series of tweets on her Twitter account @kakiewrites, Frankie—who has been a visible figure online because of her fierce stance on national and social issues—appealed to her followers for help to "spread the word" that certain groups want to remove her father from the panel to “make constitutional changes, allegedly in order to address the COVID crisis."

“My dad is defending the Constitution,” she wrote in defense of her father. “This admin can’t touch our Constitution as long as my dad’s guarding it. They cannot remove term limits (extend terms), without removing him,” she added.

“I’d put this up on the main account but I don’t want to draw any admin attention onto it when I know I’m being watched. Please please watch out for the OustKiko posts and know that my dad, who is one of the senators who voted against the anti-terror bill, is protecting our rights,” she went on.

The anti-terror bill, which was met with heavy opposition over fears that it could be used to silence critics, was enacted into law after President Rodrigo Duterte signed the measure last July 3.

“Please spread the word if you can,” Frankie urged her followers. “My father is too humble of his own accomplishments for his own good.”

“I’m here to remedy that and draw attention to the fact that he’s been fervently defending our constitutional rights for the last two years,” she said. 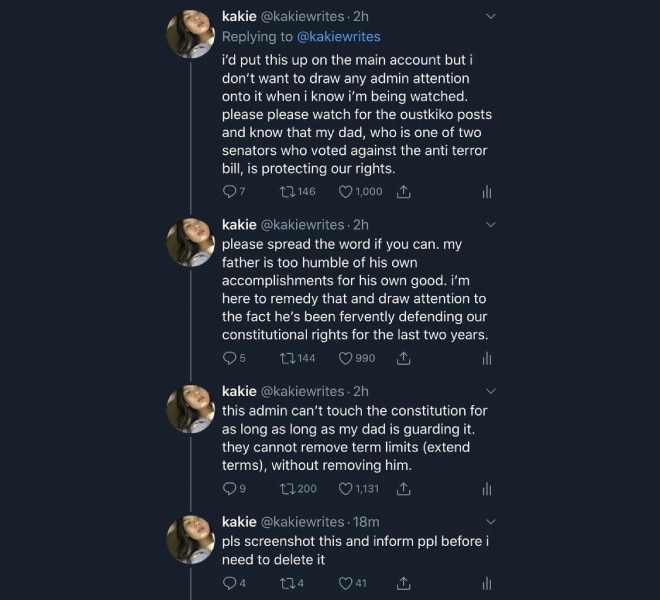 Francis, for his part, said on Wednesday, July 15, that he is "ready to give up" the Senate Committee on Constitutional Amendments chairmanship if asked by the Senate leadership, "not because of the clamor of paid trolls."

“I am ready to give up the post anytime if asked by the Senate leadership but certainly not because of the 'clamor' of paid online trolls," he told ABS-CBN News in a text message.

“Besides,” he added, “the argument that the problem of [COVID-19] will be solved by Charter Change is quite frankly out of this world.”