‘To be neutral or silent in times of injustice is injustice’: Jennylyn Mercado to exercise her right to free speech even if she’s bashed

Read Jennylyn Mercado’s response to a netizen who suggested she stop giving her opinion. 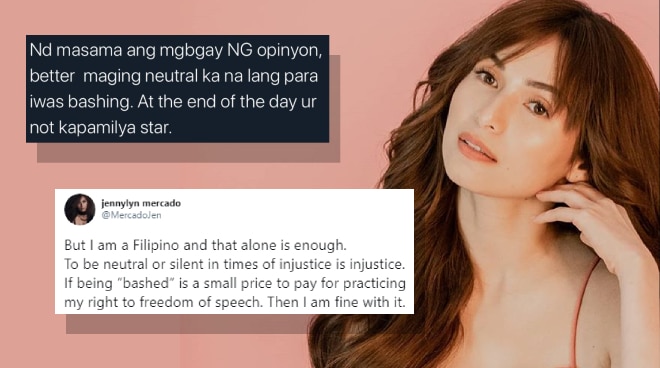 "To be neutral or silent in times of injustice is injustice."

These were the words of Jennylyn Mercado when a netizen told her to stop giving her opinion on matters involving ABS-CBN. The actress has been very vocal about her support for the network after the House committee denied it a new franchise, voting 70 to 11, which shutdown the network for good on television and radio.

In response, Jennylyn remarked, "But I am a Filipino and that alone is enough. To be neutral or silent in times of injustice is injustice."

She added that she's okay being criticized as long as she can exercise her right to free speech.

"If being ‘bashed’ is a small price to pay for practicing my right to freedom of speech. Then I am fine with it," she said. Following the decision of the House committee last July 10, Jennylyn took to social media to call out those who are rejoicing over denial of the network's new franchise.

READ: Jennylyn Mercado to people rejoicing ABS-CBN being denied a franchise: ‘You are cruel’

She added, "Hindi ba na tinuruan tayo ng ating mga magulang na maging makatao sa kapwa? Rejoicing because of other people’s sorrow is not only wrong, but inhumane. You are cruel."

In the same Facebook post, the actress also urged the people to show compassion and don’t turn a blind eye on the sufferings of others.