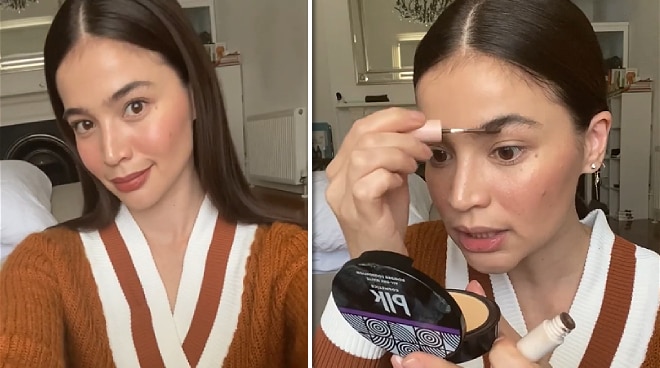 After taking a hiatus from showbiz after announcing her pregnancy last November, it looks like Anne Curtis-Heussaff is finally showing more of herself on social media this month with a makeup tutorial, which is her first vlog after giving birth to baby Dahlia in Australia in early March.

The almost seven-minute video on Anne’s Instagram account last July 9 which initially shows the bare faced It’s Showtime host introducing and using products from the newest collection from her makeup line. Anne and her husband Erwan spent the entire quarantine period in the city of Melbourne where Anne’s family is based.

Almost five months since giving birth, the 35-year-old actress and first time mom looks as radiant as ever while showing her 14.8M Instagram followers her quick and simple makeup routine before doing a Zoom meeting that same day using products from her own collection.

Used some of the products from our latest @blkcosmeticsph Universal 2.0 Collection. Be sure to watch till the end so you can see some awesome news! What I used: Illuminating Skin Tint in Vanilla & Butterscotch. Multitasking Color Stick in Cocoa & Margarita Eyebrow Gel in Taupe Lipswitch Lippie in Macchiato.