Netizens called out Angel Locsin for supporting the LGBTQIA+ community while maintaining her beliefs as a Christian. Angel Locsin — both a Christian and a proud ally of the members of the LGBTQIA+ community — responded to some netizens questioning her Christian beliefs as she showed her support for the groups of individuals belonging to the said community.

Sharing a photo on Instagram proudly expressing her being a “Proud Ally,” Angel emphasizing the need to make everyone feel safe and loved — especially in the world we live in.

“In a world with so much hatred, everyone should be allowed to feel safe & loved,” she wrote in the caption.

The Kapamilya star also included the hashtags #FreePride20 in support of the participants who were arrested during a Pride rally in Manila a week ago.

In a world with so much hatred, everyone should be allowed to feel safe & loved🌈 #HappyPrideMonth #FreePride20

While several fans of Angel praised the Iba 'Yan host for supporting the queer community, some questioned her beliefs as a Christian following her support for the community.

One netizen told Angel that members of the LGBTQIA+ community — specifically those who are in same-sex relationships should “stop the wickedness” and “repent” to save themselves from their sins.

To which Angel responded: “As for my knowledge as a Christian, ang paulit-ulit na binabanggit sa Bible is, 'Love one another' or, 'Love your neighbor.' 'Yan ang tungkulin natin sa Diyos at kapwa na dapat nating sundin at Diyos lang ang makakahusga.”

When told by another netizen that being a homosexual is a sin, she replied: “I’m all for equal rights. Why deny them that, dahil tingin mong tama ka?"

But another netizen seemed to have agreed with Angel — but on a condition that the love shared between the couple is right in the eyes of God.

"Sorry po pero you are judging them. "That's not your job. Your job in this world is to love your neighbor. Kaya marami ang nati-turn off magbalik sa simbahan sa mga LGBTQ+ dahil sa mga ganito,” she stated. 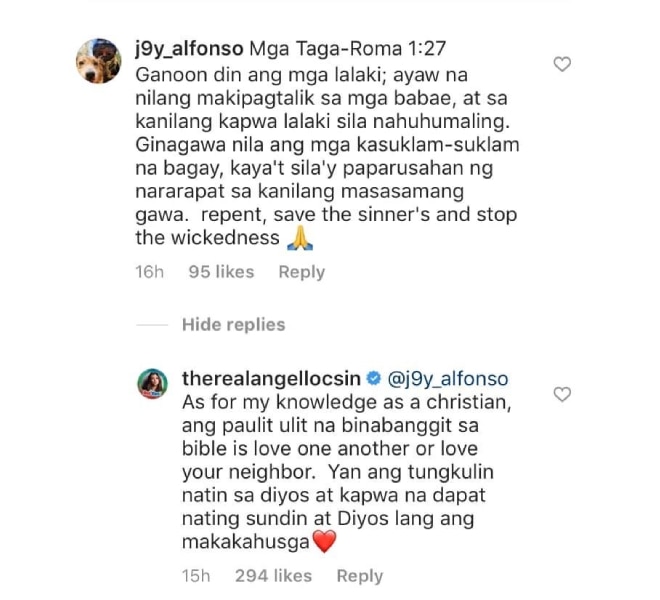 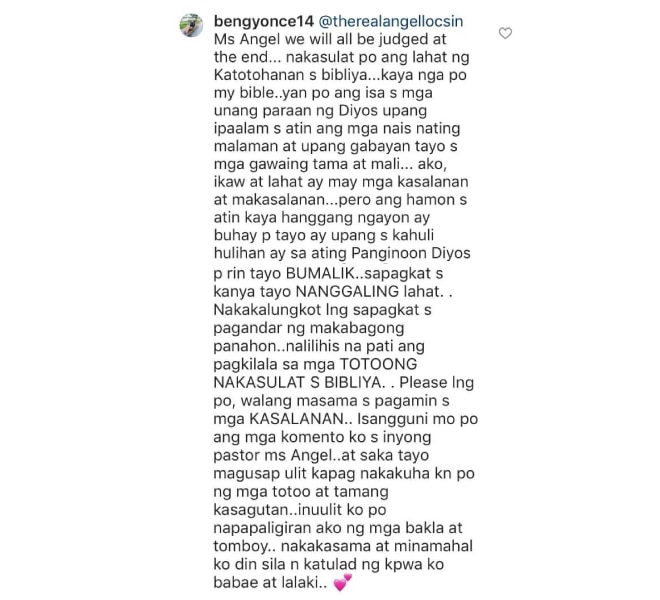