WATCH: Nadine Lustre opens up about insecurities with her chest

Nadine gave a piece of advice to those who lack confidence when it comes to their body. 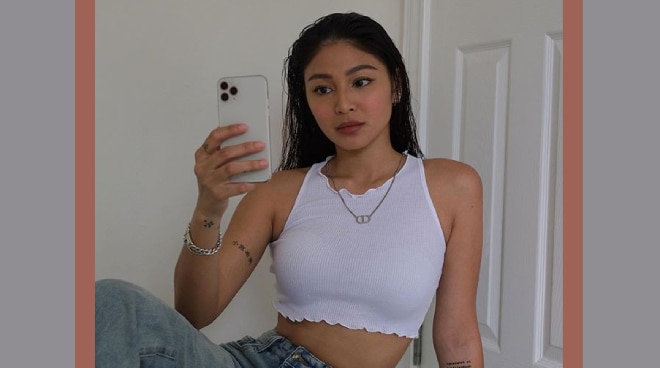 Even though many of her fans see her as a perfect girl with little to no flaws at all, Nadine Lustre admitted that she has her fair share of insecurities.

Appearing on vlogger Angel Dei Peralta’s YouTube channel, Nadine answered “boobs” when asked by the YouTuber about what makes her feel insecure.

“I wish my boobs were bigger. Kasi wala talaga. No, but boobs kasi they’re fat eh,” she said.

On how she tries to overcome her insecurities, Nadine pointed out that she has learned the art of accepting her flaws as going about it over and over would only stress her out.

I am so over the moon rn! we all waited so long for this.. #HMSwimEssentials will be available in stores this week.

“[I] just accept it. I mean, am I gonna stress myself about it? Either parang you work out but you know, make it firm or wala eh it’s really fat eh tanggapin mo. Or you eat more,” she stated.

When it comes to gaining weight, Nadine said she just doesn’t get heavy no matter how much food she puts into her body.

“Pero ‘yung body ko lean talaga ako eh no matter how much I eat. ‘Yung heaviest ko would be one hundred twenty na. That’s my heaviest na. Hindi ko na kayang lumagpas ng 120. It’s always been like that,” she stated.

Sharing advice to those who lack confidence when it comes to their body, she said: “Love yourself. Love the skin that you’re in. And you know, don’t be ashamed of anything. That’s what the universe gave you. Accept it. Just you know, be yourself.”

Watch the episode below: