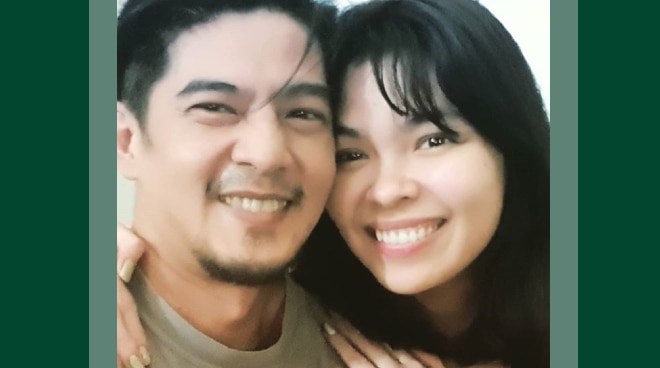 "Thank You Lord for this wonderful blessing."

This is what actor Romnick Sarmenta said as he finally acknowledged actress Barbara Ruaro as his girlfriend on Sunday, June 21.

On Instagram, the "Halik" star shared a photo with his new sweetheart before professing his love for her, saying he's grateful to Barbara for "the gift of love" and "for making me smile each day with the gift of your presence."

B L E S S E D Overjoyed and happy That's what you make me Thank you for this blessing The colours that you bring I thank God for you And all that you are You're special to me I love you Bie 🤍 Thank You Lord for this wonderful blessing. Thank you @bieruaro for the gift of love. For making me smile each day with the gift of your presence. I'm always here for you. #alwaystogether🤍

"Thank you for this blessing. The colours that you bring. I thank God for you and all that you are. You're special to me. I love you Bie," he added.

He also assured Barbara that he will always be there for her.

For her part, Barbara said: "I love you. Always."

Romnick's announcement came only days after he confirmed being romantically involved anew in an open letter he posted on Facebook.

Without divulging his partner's identity, he wrote: "These past few days, people had been talking about me and a person whom I respect greatly."

"What people do not know about her is that she is an insightful, talented, passionate individual with several advocacies that mirror my beliefs. That she is a person of great importance to me, deserving of respect and privacy. That I see her equal to anybody else, never less and never more than the beautiful person that she is. That I see her as my equal, and at a lot of times - a person whom I admire. That for me - for her to be known as a just a person who is with me - is a grave insult to her, and a disservice to what she means to me."

He went on: “Because of me, she had been called names, accused of things that she is not and do not do, and had been exposed to scrutiny that she doesn't deserve.

"Only her intelligence, wisdom, trust and knowledge of me stopped her from going away. And I am grateful. For her."

In his open letter, Romnick also clarified that there was never a third party involved in his separation from his wife of 19 years, Harlene Bautista.

“Much had been said about both of us, and I guess to a certain degree, more about me and my character, by people who do not know me personally. But to set things straight, there was no third party when it happened. I wanted that clear," he said.