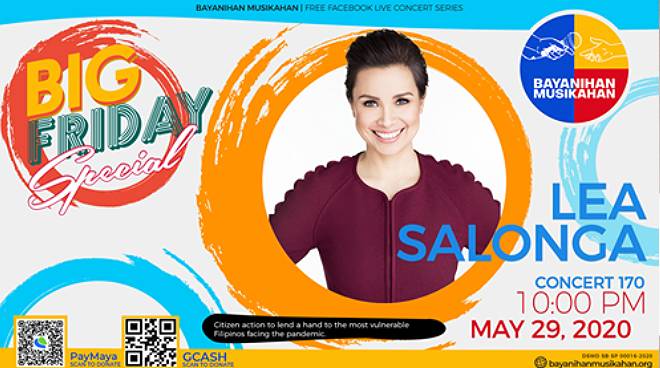 Lea Salonga is set to take the spotlight anew as she returns for another Bayanihan Musikahan performance.

The second season of the online concert series remains to be a donation platform to raise funds for the urban poor whose means of living have been affected by the coronavirus crisis.

The Broadway Diva, who performed in the first season of Bayanihan Musikahan in April, will return for a second show at 10 p.m. on Friday, May 29. She will be joined by Erik Santos and Ice Seguerra.

“We'll be repeating a few songs from the last one (including one masterfully rearranged) and adding a few that I've never sung before IN MY LIFE! And, I shall also be having a couple of guests: Erik Santos and Ice Seguerra! So come and join us for a feel-good Friday!” she added.

Meanwhile, on Twitter, the actress-singer shot down hopes of fans that her former onscreen partner, Aga Muhlach, will guest on the show.

Lea and Aga were one of the most memorable love teams to come out in the ‘90s following the massive success of their two films "Sana Maulit Muli" and "Bakit Labis Kitang Mahal,"