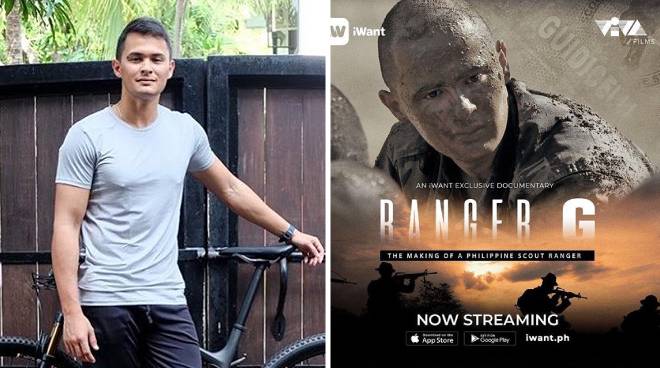 With his new documentary Ranger G now available for streaming online on iWant, Matteo Guidicelli shared that he was initially not allowed by his management to do it and only relented when he could do a documentary of his experience. “In the beginning it was a personal goal. So I was able to talk to them for two to three months. I asked sila Boss Vic (Del Rosario of Viva Entertainment) and sabi niya, ‘Matt, puwede gumawa na lang tayo ng action movie, kunwari na lang sundalo ka.’ Sabi ko, ‘Hindi eh. It’s not going to be the same thing.’ My dream was always to be in the army when I was a little kid. But I could say I was always afraid to do it and last year I found the opportunity to do it. I guess I found the courage. So sabi ni boss Vic, ‘Okay Matt sige pero pag pasok mo dun kailangan may dala ka pag labas mo. Why don’t you shoot a documentary?’ Sabi ko, ‘Sige hold on, let’s see if the army will allow it in the first place because this has never been done before.’”

Matteo admitted that asking permission from the army to shoot the documentary was also another hurdle he had to overcome before joining. “At first they were kind of hesitant about it because there were a lot of things during the military training that’s not allowed to be seen by civilians in the outside world. So there were discussions and meetings and eventually they said this could be a good opportunity to open the doors to the world about the Philippine army. Alam natin lahat that the army is a very closed group. They don’t want people knowing what’s really happening inside but I think this is one of the first times that they opened the doors especially in training to show the people what’s the training all about. So eventually they agreed that we could should the documentary but on one condition, that they do not disturb the training and they have to respect several rules and everything that comes out and is shown to the public has to be approved by them. It was an amazing experience,” he said.

Aside from the training camp which lasted for 45 days, Matteo said he also underwent a variety of courses like the airborne course and a civil military operation course. “I’d recommend it to everybody. Military training is the best thing I’ve ever done in my life. It’s the toughest but up to today, I miss it. Every single day I think about it. I think the ranger training they say is one of the most difficult trainings I’ve ever done,” he said.

The Kapamilya actor-singer also shared what he hopes viewers can learn from watching Ranger G. “Yung pinaka message na gusto ko iparating sa mga Pilipino and to everybody around the world, na these soldiers sacrifice their lives so much for our freedom and to protect us and they deserve so much more respect and love and opportunities. Halimbawa pag makita mo yung mga sundalo sa Amerika meron silang VIP access sa airports. Sana one day we can achieve this for our country also. They devote and give their lives for the country,” he added.