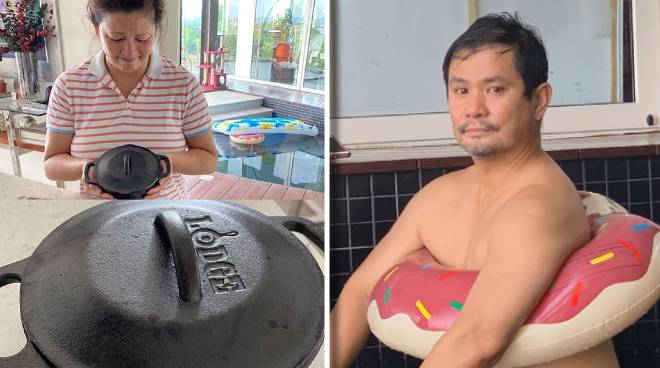 Admit it or not, you’ve been a victim of online shopping at least once in your life — especially if you’re into buying stuff on the virtual market. Well, no one can blame you especially since some photos of these products can be deceiving. But if you think you’re the only one who has been fooled online, think again because celebrities are no exception — even couple Ogie Alcasid and Regine Velasquez.

In a series of Instagram posts, Ogie and Regine narrated their misadventures with online shopping.

It all started when the Asia's Songbird posted a photo of her husband and his tiny donut floater.

In another post, Regine gave an update to her followers by sharing a video where Ogie can be seen floating in the pool while using his tiny donut floater.

The singer, seemingly having fun seeing her friends enjoy her series of funny posts, opted to share another funny photo of her husband in his “tiny” donut floater.

With several netizens curious as to what the real story is behind his tiny inflatable floater, Ogie shared a photo of what he actually ordered from the online store versus the one that arrived at their home — thereby revealing his own “expectation vs. reality” story.

In another post, the It's Showtime hurado uoloaded photo of his wife’s own misadventures with online shopping — showing a picture of the latter holding a pot she ordered from a virtual store.