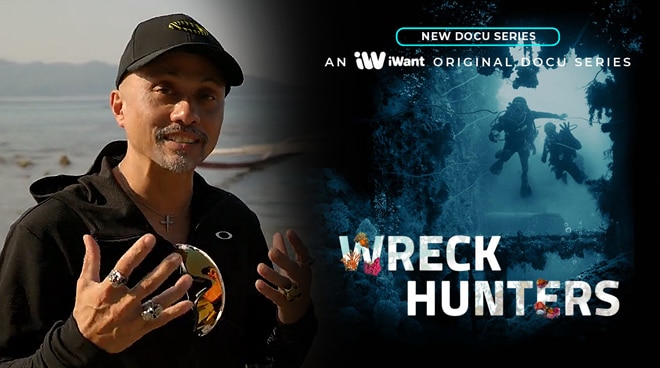 Aside from hosting the travel and lifestyle program G Diaries starting last year, triathlete and ABS-CBN Lifestyle Ecosystem and Creative Programs president Ernie Lopez is now also a host of the new iWant Original Documentary Series Wreck Hunters which is now available for free streaming on iWant. Together with his co-host Wowie Wong, they travel to breathtaking underwater sites, bringing with them years of diving experience to bring viewers closer to the Philippines' amazing wrecks.

“We had a couple of very memorable incidents. The one that really stuck out for me was the dive in Palawan. It’s very interesting that ships of war which were designed for destruction and chaos underwater they are wrecks and now they’re giving life not just to corals but fish because every wreck in Palawan is considered a sanctuary. So whenever there’s a wreck around, you cannot fish around that wreck. And because of that the ship becomes a sanctuary and the aquatic community thrives. So something that was designed to give death is now giving life. And I love the metaphor. That’s how we should be. We should give life. But even more than the dive, what I really enjoyed are the friendships I made on all the trips we made. It’s the friendship with the production team. We’re just constantly laughing,” Ernie shared.

The Wreck Hunters host hopes online viewers will also learn a lot from their five-episode series that visits different unique and beautiful dive sites. “It normally takes lots and lots of years of training and experience to do this. It’s something that can be quite dangerous and can be quite fatal and lethal without training but when you watch Wreck Hunters, you can experience it in the safety of your home. I think it’s a very fun way to learn about history. I learned a lot of historical facts that I had no idea about until I started filming this show and watching it. I didn’t realize that the Japanese were using these warships and camouflaging it to make them look like islands. So when they would move around, the American war planes flying above that these were not islands, they were ships. I wasn’t aware of those interesting details before,” he explained.

Growing up in a family where both of his parents were also avid divers, Ernie said it was not hard to fall in love with the sport. He also looked up to a underwater adventurer that added to his interest. “When I was much younger, one of the shows I loved to watch was Jacques Cousteau, he’s a French diver and he would talk about all the different places he went to. I was first introduced to diving by Jacques Cousteau and I loved it. And now, in a small way, I’m getting to do something that’s similar to him. I never imagined it even in my wildest dreams that I could be doing something like that,” he recalled.

As a hands-on father of three, Ernie admitted his children can also be his harshest critics. “I can’t even ask them to watch anything I come out in. They’ll go, ‘Dad, you’re so narcissistic. Why do you want to watch that with us?’ They’ll be harsh. But when my son saw just the intro spiel of Wreck Divers, he said, ‘Whoa Dad! You’re involved with that?’ He actually liked something I’m doing. I couldn’t believe it. Usually my family is putting it down or they’re bored or they have no interest in what I’m doing. But this one they liked it. So as jaded as they are they’re interested in it so maybe the other people might be entertained. I hope that this show gets a global audience because it shows the rest of the world really what we have and it’s really interesting. There’s a lot of history to learn and there’s a lot of things to find out,” he shared.

Wreck Hunters is now available for streaming on iWant