Francisco Martin, who is now part of the Top 7, wowed the judges of the competition once again. 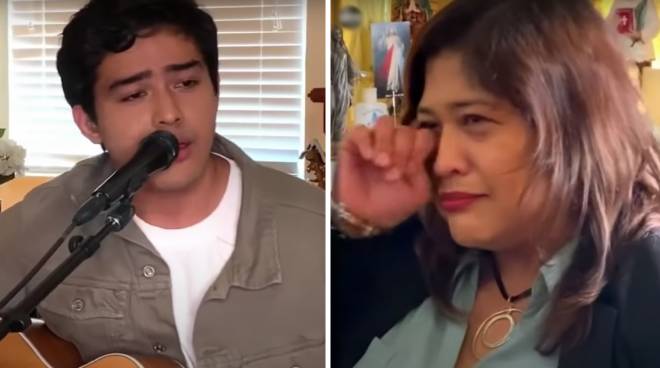 The mom of Fil-Am singer Francisco Martin, a Filipina immigrant in the US, tried to hold back her tears as her son delivered an emotional tribute for Mother’s Day.

Martin, who officially made it to the Top 7 of the competition, performed back-to-back songs on the May 11 (Philippine TIme) episode of American Idol.

The songs he sang were Leon Bridges’ “River” for Mother’s Day and Phil Collins’ “You’ll Be In My Heart” from the film “Tarzan” for Disney Night, respectively.

Right after the performance, Martin’s mom hugged him and said: “I love you, baby.”

Meanwhile, all three judges were once again wowed with his performances, saying he is deserving to be at the top spot, among others.

"This set of Mother's Day songs is really separating the pack, it's showing who deserves that top position," Katy Perry said.

She added: “You are making it difficult for the other contestants because that performance was so soulful and beautiful and real. It was so heartfelt what you just did."

Bryan, on the other hand, stated: "I think he beat the actual record.” He went on: "We have heard that song so many times that, man, from the first note, I would buy that right now, that performance."

Meanwhile, Lionel Richie said: “The thing I love the most is your confidence is front and center, you're no longer in your head.”

He continued: “Congratulations because you have a career and that's what's most important, and we saw it happen here on American Idol."

See his performance of “River” below:

See his performance of “You’ll Be In My Heart” below:

Other contestants who made it to the Top 7 include Arthur Gunn, Just Sam, Jonny West, Louis Knight, Julia Gargano, and Dillon James.