The Hunks reunite for 'One Voice Pilipinas' fundraising event

Members of the popular 00s all-male group The Hunks virtually reunited to take part in an online fundraising event that aims to provide food to the less fortunate during the COVID-19 lockdown. 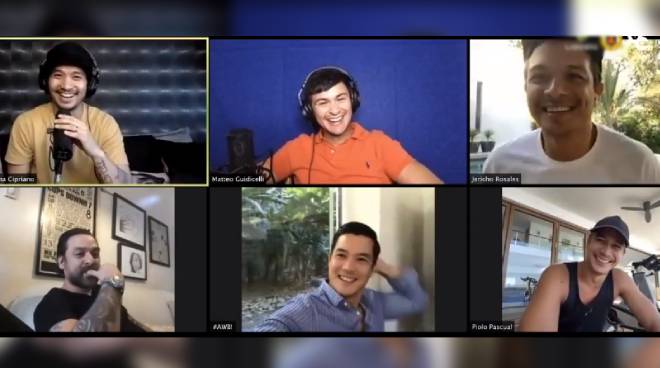 Members of the popular 00s all-male group The Hunks virtually reunited to take part in an online fundraising event that aims to provide food to the less fortunate during the COVID-19 lockdown.

Save for Carlos Agassi who had a prior commitment, the members—namely, Piolo Pascual, Jericho Rosales, Diether Ocampo, and Bernard Palanca—on Saturday, April 4, appeared on the third episode of "One Voice Pilipinas," hosted by Matteo Guidicelli and Kean Cipriano, to recall their heyday as The Hunks and looked back on how being a part of the group changed their respective lives.


“The Hunks for me was at first, it was really a decision I made based on me needing to work. It was good opportunity for work,” said Bernard, now 43.

“After the first time we performed on ‘ASAP’ as a group, I looked at myself and said I think I’m in a boyband. Coming from the whole rock and roll band, it was a big jump that it took me a while to embrace. But the guys made it easy," he added.

The Hunks, who have since parted ways, were last seen together during a reunion on the Sunday variety show "ASAP" in 2015. According to Piolo, nothing much has changed in terms of their dynamic as a group.

The four stars also shared their two cents on the crisis the Philippines is now facing due to the coronavirus pandemic, as well as its impact on the lives of millions of Filipinos.

“Kung titignan mo yung bright side, we are all going to be more aware of our actions. I know there’s a pandemic happening but it’s great to breathe fresh air, it’s great not to be stressed with traffic," according to Jericho.

"I hope everyone remembers the good things that happened during this bad time. I think the norm would be everybody will be more conscious about being clean, conscious about taking care of yourself,” he added.

"One Voice Pilipinas," in collaboration with Landers Superstore and the Philippine Army, has so far raised P8.7 million.