Ronnie Liang, in an Instagram post last April 4, said they are targeting 6,000 families in Metro Manila each day to receive relief goods that will last for about 7-10 days. 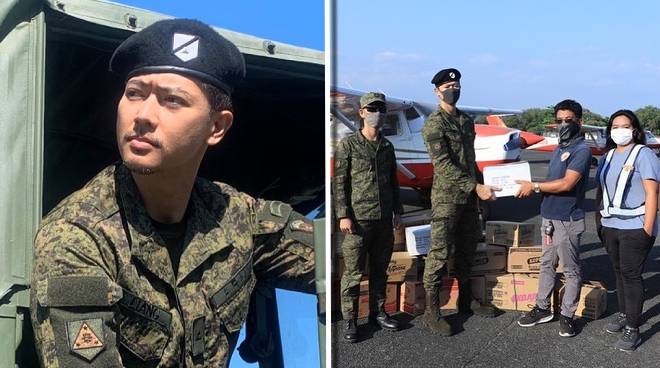 As part of his duties as an army reservist, singer Ronnie Liang dedicated his service to the people — especially the frontliners — amid the COVID-19 pandemic.

Include caption By using this embed, you agree to Instagram's API Terms of Use .

Liang, who also happens to be a licensed pilot, has apparently been helping out in the transportation of those working in the medical field.

"I was assigned to bring medical workers to their places of work. And pampa-good vibes, one time, they asked me to sing,” he said, quoting his statement in a press release.

While he admitted that the thought of acquiring the infectious disease brought him fear, the “Ngiti” hitmaker said that it did not stop him from accepting the mission.

He went on: "Hatid-sundo namin sila. And makikita mo sa lahat ng frontliners na they are there, showing their deepest sense bilang tao.

On what keeps him motivated to go on with the mission, he said: "I want to help, contribute, and be part of the solution in fighting against COVID-19, while preserving our force by serving those who served. Let's unite against a common, invisible enemy.”

In an Instagram post last Saturday, April 4, the singer gave an update on the fourth day of his 30-day relief pack operations.

He revealed that they are targeting at least 6,000 families with five members per barangay in Metro Manila each day to receive goods that will last for 7-10 days.

4th day today! We are targeting 6000 families per day(6000 food packs) per barangay here in Metro Manila. 5 members per family. Each relief goods will last up to 7-10 days. We will do this for 30 days! #Bayanihan #WeHealAsOne #ParaSaBayan #armycares #army #armylife #fightcovid19 #fightcovid19together #armor #unity #covid19 @philippinearmy @armorpambatodivision

Liang also previously teamed up with APG International Aviation Academy, donating P70,000 worth of groceries, among others.