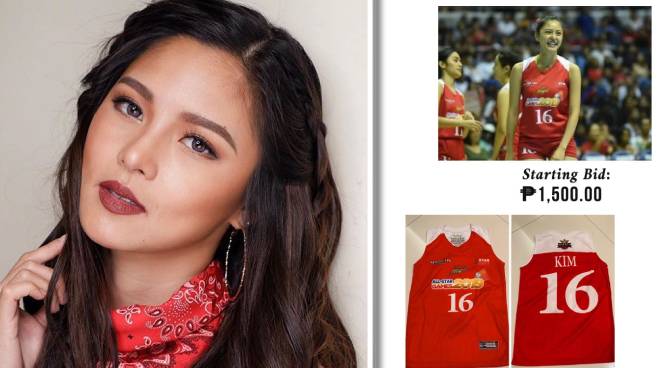 Through the fundraising campaign of volleyball star Sisi Rondina, the actress put up her jersey for sale at a starting bid of P1,500. The relief drive, which was launched by the former University of Santo Tomas (UST) Golden Tigress last week, aims to purchase personal protective equipment, face masks, face shields, and gloves for frontliners deployed in the barangay being tagged as Cebu's epicenter for coronavirus infections.

To jump-start her fundraiser, Sisi has auctioned off three of her own UST jerseys, in addition to some pairs of shoes. Philippine Basketball Association (PBA) MVP June Mar Fajardo, whom the athlete counts as a distant relative, also put up for sale his San Miguel Beer jersey for the initiative.

Aside from Kim, the jerseys of Jaja Santiago, Dimdim Pacres, and Johnvic de Guzman are also up for auction. UST player Eya Laure offered a pair of her shoes to be bidded out as well.

Notably, Kim portrayed Sisi in an episode of "Maalaala Mo Kaya" in July last year. At the time, the latter had just won Most Valuable Player (MVP) honors in the UAAP (University Athletics Association of the Philippines) Season 81, and had led the UST Golden Tigresses to the Finals.