WATCH: Franki Russell, Marlon Stockinger do a Tiktok dance together

Rumored couple Franki Russell and Marlon Stockinger have joined the TikTok craze, as more Filipinos, including showbiz personalities, continue to fight boredom while being confined in their homes duri Rumored couple Franki Russell and Marlon Stockinger have joined the TikTok craze, as more Filipinos, including showbiz personalities, continue to fight boredom while being confined in their homes during the month-long community quarantine.

In an Instagram post, Marlon posted a video of him sharing some moves with Franki as they dance to a remix of MC Hammer's "U Can't Touch This".

"Tiktockinger [Franki]," wrote Marlon in his caption, as he invited his followers to follow his account on the TikTok app.

It is unknown whether Franki and Marlon are quarantined together, although the latter did not exactly deny this, when he replied to New York-based actress Rasheda Crockett, who commented on his post with, "You were locked in with Marlon." 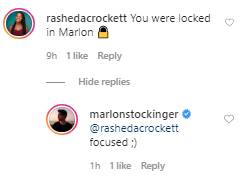 It can be recalled that Franki denied being in a relationship with Marlon, after photos of them together in La Union with friends last February sparked speculations of a brewing romance online. In her live interview on "Tonight with Boy Abunda", the former "Pinoy Big Brother" housemate explained that she and Marlon often go out in groups, although they also go out together at times. She also said that she's been living in the country for about a year, and that she's "very open to meeting people and making [her] circle a little bigger." That includes being open to dating Marlon, she added. "I'm single and he's single so there's nothing wrong with that," she said. For his part, Marlon, who was previously in a relationship with Miss Universe 2015 Pia Wurtzbach, has remained mum on the rumors.