Bela Padilla leads relief operations in the streets, hands one million worth of goods to non-profit organization

Bela Padilla sought the help of the Philippine Army in the repackaging, transportation, and distribution of relief goods. 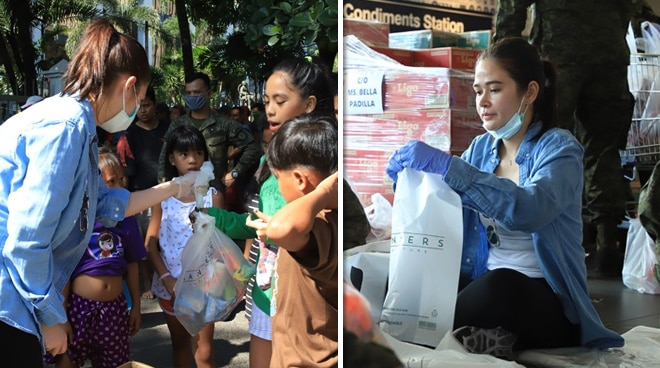 After raising a whopping 3.3 million-peso fundraiser, actress and philanthropist Bela Padilla went out of her way to deliver her promise — distribute relief goods to those in need amid the COVID-19 crisis.

The Philippine Army, in a Facebook post, said that the Army Headquarters and Headquarters Support Group offered assistance to the Kapamilya star - deploying four Army vehicles and ten military personnel for the repackaging, transportation, and distribution of relief goods, among others.

“Through the Army Headquarters and Headquarters Support group, four Army vehicles and around 10 military personnel assisted the actress in repacking the goods at Landers Otis branch Manila,” the Philippine Army wrote.

It added: “Goods was then distributed to the target beneficiaries such as the homeless, street vendors, elderly, persons with disability, children, commuters, Caritas Manila as well as jeepney, pedicab and tricycle drivers around Metro Manila areas.”

Thanking Bela Padilla for her efforts, Army Commanding General Lt. Gen. Gilbert I. Gapay stated: “The Philippine Army appreciates the initiative of Bela Padilla in reaching out to the persons who need assistance while Luzon is under ECQ. We are grateful that she enjoined the Philippine Army in serving these people. In this time of crisis, we really need to work together regardless of our professions in order to serve our kababayans.”

Meanwhile, Caritas Manila, the social arm of the Archdiocese of Manila, revealed on Facebook that Bela Padilla handed them one million worth of relief goods.

“We have received Ms. Bela Padilla’s donation of 1 million pesos worth of canned goods and rice for our Ligtas COVID-19 campaign,” the post read.

It added: “We express our heartfelt gratitude to you and to all the donors who are in solidarity with the poor as we fight COVID-19.”