REVIEW: ‘On Vodka, Beers, and Regrets’ is all heart, and also a few aches

Director Irene Villamor’s latest romantic drama takes viewers on a bittersweet journey on how to create your own fairy tale love story. 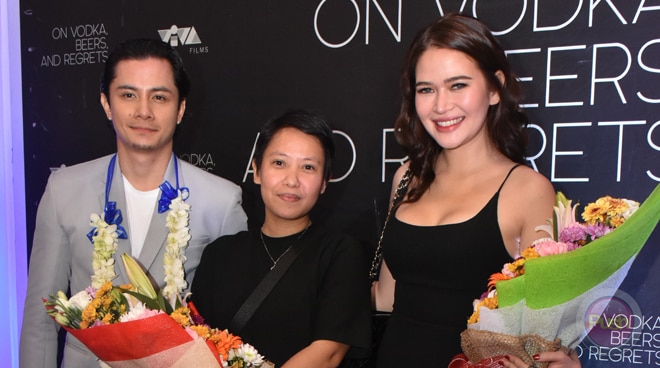 Having been paired onscreen twice before, JC Santos and Bela Padilla produce an almost immediate chemistry whenever they share a scene, even if they are playing the most unlikely of characters to be drawn to each other in real life. In On Vodka, Beers, and Regrets, JC got to slip into almost the same prince charming persona that we first saw him in 100 Tula Para Kay Stella. In this film, he is quiet and introspective as band vocalist Francis who falls hard for his high school crush turned trainwreck of an actress Jane Pineda, played by Bela.

Bela’s character Jane frequently drowns her sorrows by drinking at the same bar JC’s band performs at every night. The two cross paths and end up sharing more than just a few drinks which creates an unexpected bond. Although the two lead stars may not have given anything we haven’t seen before in their previous films, JC and Bela’s natural chemistry is easy to watch and you’ll find yourself rooting for both of them to do well all throughout the story.

But the real revelation in On Vodka is Matteo Guidicelli’s unexpected portrayal as Bela’s on-and-off again flame. A far cry from his matinee idol roles, the Matteo you see in this film is abusive, manipulative, and downright douche-y and his scenes with Bela can be considered as some of the most pivotal moments in the film. Drinking is a major theme seen all throughout this film. Whether it be from the point of view of the lonely alcoholic, or the people surrounding them who are affected directly or indirectly. On Vodka is heartbreakingly honest and unapologetic in its portrayal of flawed humans who all just want to feel that somebody really truly loves them.