BTS buckled up for a fun carpool karaoke experience with James Corden. 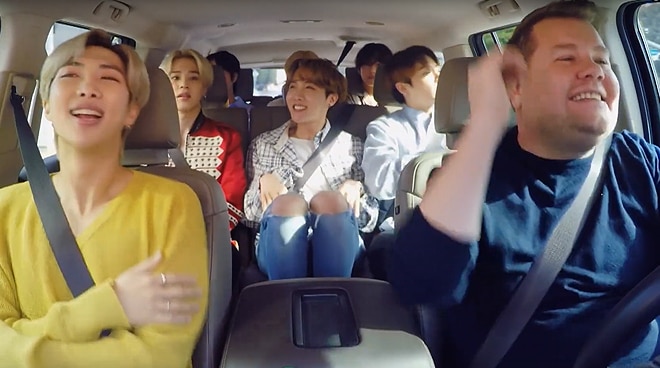 K-Pop group BTS is the latest to hop in James Corden’s car for another fun carpool karaoke ride experience.

On Wednesday, February 26, BTS sang some of their hits and songs from other artists including Bruno Mars and Cardi B’s “Finesse (Remix)” and Post Malone’s “Circles.”

Cardi B, seemingly flattered over the group’s gesture to include her song, retweeted a clip on Twitter where the boys can be seen singing to her collaboration with Bruno Mars and simply captioned it with a heart emoji.

The members of the K-Pop group, who all have been living under one roof for more than ten years now, also opened up about some of the conflicts that the group faced through the years.

“It’s been a decade. And we’ve found a very efficient way to solve the fighting,” RM said.

SUGA, on the other hand, said: “Before we used to. But now we don’t have any.”

Jimin and V, whom most of the members think are most likely to get into a fight, both agreed that they argue over one thing, saying: “Dumplings.”

The boys also talked about who among the biggest names in the world of entertainment stood out the most to them and mentioned the likes of Madonna, Lil Nas, Post Malone, among others.

“Is this your way of asking me to join the band? Is that you’re doing? ‘Cause it feels like that’s what’s happening. ‘Cause I will quit this job. I’ll do to join BTS,” James said.

When Jin asked him if he’s willing to go on a world tour, James, who is apparently taking weekly dance lessons, said: “I was born ready.”

BTS joined James Corden for a dance lesson at a studio and grooved to Iggy Azalea’s “Black Widow” and Zara Larsson’s “Ain’t My Fault.”

Of course, the group, composed of V, Jungkook, Jimin, SUGA, Jin, RM, and J-Hope also showed off their dance routines.

Fans of the group, known as ARMY, particularly loved the episode because of the way James made the boys comfortable throughout th entire episode.

BTS, considered as one of the biggest K-Pop groups in the world, is behind the hits "FAKE LOVE," "Blood Sweat & Tears," and "Boy With Luv.