Actors Robin Padilla and Philip Salvador, who are vocal supporters of President Rodrigo Duterte, denied that they are opposing the franchise renewal of ABS-CBN. 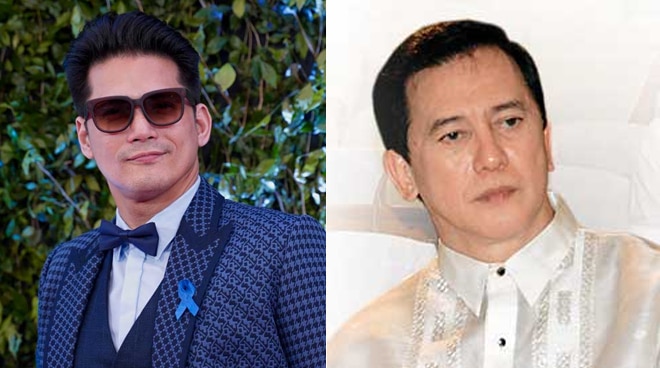 Actors Robin Padilla and Philip Salvador, who are vocal supporters of President Rodrigo Duterte, denied that they are opposing the franchise renewal of broadcast giant ABS-CBN amid threats from the government to void its license to operate, which is set to expire in March.

The two were present on Monday's highly anticipated hearing on issues surrounding the network's compliance with its franchise, sitting at the back of the session hall as ABS-CBN executives answered questions from senators regarding the quo warranto petition filed by the Solicitor General Jose Calida against the company earlier this month.

READ: Statement of ABS-CBN on OSG’s quo warranto petition: ‘We did not violate the law’

Speaking with ABS-CBN News, Robin stressed that he does not support the possible shut down of his home network, echoing director Joel Lamangan's earlier statement that revoking the broadcast giant's license to operate will greatly impact the Philippine Cinema, as ABS-CBN happens to be the largest platform that filmmakers and actors like him can showcase their work.

Robin, however, said that he was pleased by the network's apology regarding a 2016 campaign ad paid for by former Sen. Antonio Trillanes IV that allegedly maligned the President, as well as the latter's unaired political ads during the 2016 electorial campaign.

At the inquiry, ABS-CBN Corp president and chief executive officer Carlo L. Katigbak said the network was sorry if it offended the President, but denied insinuations of bias, saying that the media giant "does not and will not have its own political agenda".

"We were sorry if we offended the President. That was not the intention of the network. We felt that we were just abiding by the laws and regulations that surround the airing of political ads," he said.

"Today, we want to make a categorical statement together with our chairman Mark Lopez that ABS does not and will not have its own political agenda," Katigbak added.

The ABS-CBN chief clarified that all national politcal ads of the President during the 2016 elections were aired, but local ads worth P7 million could not be accomodated. Of the P7 million, P4 million was refunded to the Duterte camp, while the remaining P2.6 million was no longer accepted by the President, as the network was "delayed" in giving back the money, admitted Katigbak.

"On this issue, we acknowledge our shortcoming in our failure to release the refund in a timely manner," Katigbak said.

Meanwhile, Robin and Philip were also glad that fellow actor and Senator Lito Lapid brought up the issue of the network's supposed failure to give overtime pay to its actors and production crews.

Cory Vidanes, ABS-CBN's chief operating officer for its broadcast operations, had clarified during the hearing that the reason why artists are not provided with overtime pay is that they are being paid per program or per taping day.

"This is very healthy for all Filipinos," said Philip during his interview.

Meanwhile, the House of Representatives has yet to schedule a hearing that will tackle the long-pending measures—a total of eleven pending before the lower chamber— on ABS-CBN's franchise renewal.