K-Pop stars Uee of After School, Yunhyeong of iKON become flight attendants for a local airline

The former After School member and iKON member donned uniforms worn by flight attendants for a local airline. 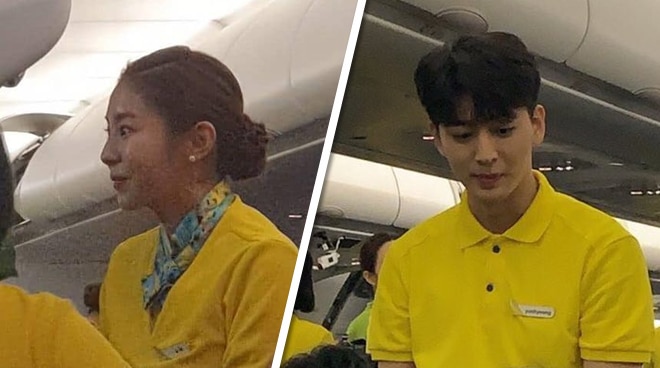 On Facebook, a fan named LipaYui Kim shared a photo of her encounter with the After School member and actress, who can be seen assisting passengers onboard the plane.

While it has yet to be officially announced, fans speculate that Uee became a flight attendant as part of her stint in the South Korean reality show Cabin Crew.

Rumors about the Philippine arrival of two other Cabin Crew cast, Eun Ji-won of Sechs Kies and Yunhyeong of iKON, made rounds online last January.

Meanwhile, iKON member Yunhyeong can be seen serving meals in separate photos shared by another fan.

Yunhyeong from iKON was at Intramuros, Manila earlier and a lucky iKONIC had a picture with him 🥺 pic.twitter.com/icfsO9CVWG

Uee, alongside the members of the two boy groups, were confirmed as part of the cast of Cabin Crew around November 2019.

Cabin Crew is a South Korean reality show which fulfills the dreams of South Korean celebrities to become flight attendants.

Uee, who is best known for being a member of the Pledis Entertainment-formed group After School, left the group in 2017. She has also appeared in dramas Marriage Contract and My One and Only.

Yunhyeong, on the other hand, debuted as part of the YG-Entertainment-managed group iKON in 2015.