Pentagon made some of their fans feel kilig after responding to their tweets in Tagalog. 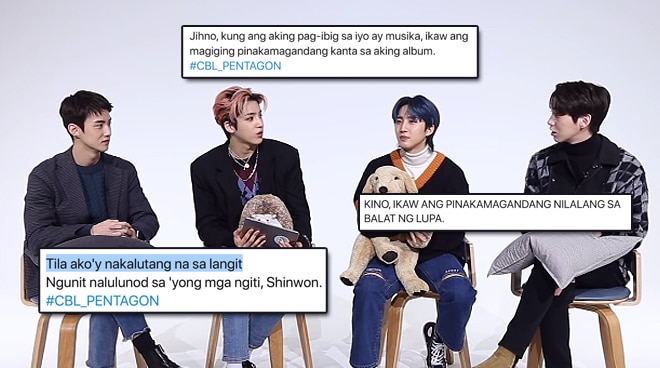 After singing lines from their hit “Dr. BeBe” in Filipino and trying out well-loved local snacks, K-Pop group Pentagon did another challenge which required them to speak in the native language of Pinoys.

READ: K-Pop group PENTAGON sings hit in Tagalog, hopes to do a show in PH this year

Called “Call Me By Your Language,” the game featured Pentagon for the sixth episode of the show which sees the members of the K-Pop group replying to messages of their Pinoy fans in Tagalog.

“I think speaking directly in Tagalog to our fans made the messages feel more sincere,” one of the members said.

As of this writing, the video has already garnered more than 82,000 views on YouTube.

The group, which originally consisted of ten members, is currently composed of Jinho, Hui, Hongseok, Shinwon, Yeo One, Yan An, Yuto, Kito, and Wooseok.

Pentagon, which debuted in 2016, released their debut EP during the same year.