Melai Cantiveros and Jason Fransico renew their wedding vows to mark their seventh anniversary as a married couple. 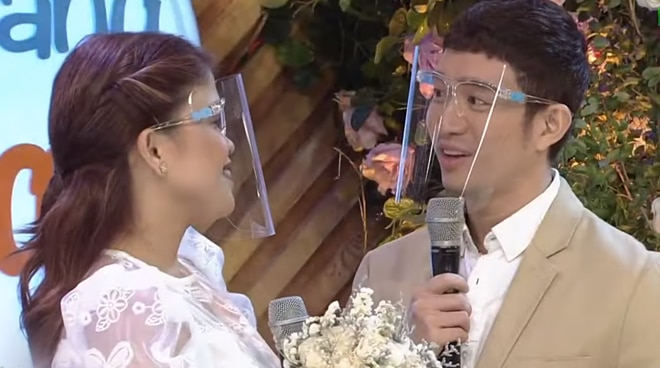 Melai Cantiveros and Jason Fransico renewed their wedding vows to mark their seventh anniversary as a married couple.

The two tied the knot for a second time in the December 9 episode of the morning talk show Magandang Buhay.

The ceremony was officiated by Fr. Rogie Castellano—the same priest who officiated their wedding seven years ago—and "attended" by their daughters Mela and Stela, as well as Melai's mom Virgie, via Zoom.

As part of her wedding vow to Jason, Melai told her husband: "Papang, always remember that I'm always here for you. Si Lord ang center sa buhay natin, and [I] promise you to cross the ocean for you, and be your hero and your strength. Anything you need. Lahat nalagpasan natin, and madami pa tayong malalampasan. Basta't kapit lang tayo kay God, at walang sukuan. Oh 'di ba? Now look at you, look at me. How you like that?

"Papang, always kong ipagdarasal na for you and me, we will not kill this love. And pananatilihin kong maging sweet sa 'yo, like an ice cream chillin' chillin'. So Papang for me, you are always shining through the city with a little funk and soul, and you will always be the one to light me up like a dynamite. I love you. Papang, I love you so much," she added.

Melai and Jason tied the knot at the Holy Cross Parish in General Santos City on December 9, 2013.

The couple first met each other when they joined the reality show Pinoy Big Brother in 2009.