TV host and model Phoemela Baranda shows off her baby bump in her recent bikini photos. 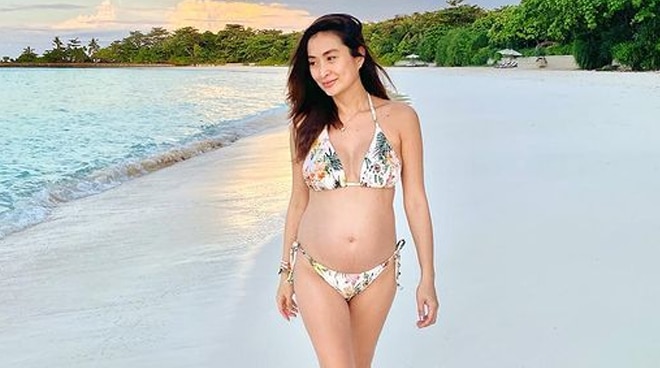 TV host and model Phoemela Baranda left most of her followers in awe when she flaunted her baby bump in her recent bikini photos.

The snaps were taken while Phoemela, who is currently expecting her second child, was vacationing on the island paradise of Amanpulo, Palawan.

"Baby stroller," she said in one of her posts, which showed a photo of her flaunting her growing belly in a floral two-piece swimsuit.

In a separate post, Phoemela is seen showcasing her pregnancy bump while wearing a pink bikini top.

"Burp," she simply wrote in the caption.

Another photo shows the model sporting a white swimsuit while posing by the beach. It had the caption, "24 weeks."

It was last month when Phoemela, 40, revealed that she is pregnant with her first child with her partner, businessman and professional race car driver Jason Choachuy.

In her interview with fashion magazine Preview, Phoemela said she is already in her second trimester, and is due to give birth in March 2021.

Phoemela is already a mom to Kim Nichole, whom she had when she was just 19.

Kim, who was a teen housemate in Pinoy Big Brother: All In and is now 21 years old, said she's happy and excited for her mother.

"I know a lot of things are going to change, but I'm happy for my mom because this is such a big blessing for us to have an addition to our family since it's always just been the two of us," she said.