Carlos Agassi gets into a freak accident at the gym: ‘I felt and tasted blood’

Carlos Agassi talks about his realizations after being rushed to the emergency room last December 7. 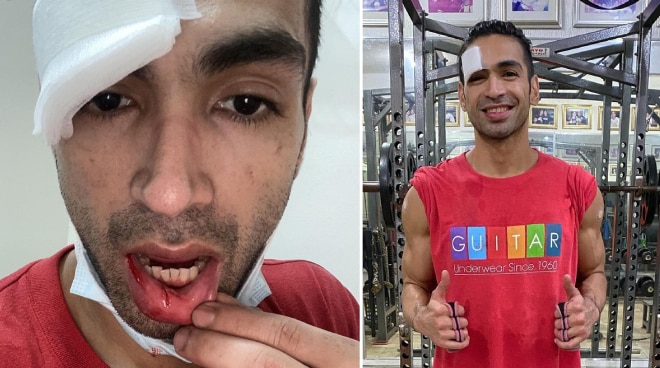 Even after laying low from showbiz to focus on his different businesses, Carlos Agassi continued to be devoted to working out and maintaining his buff physique which has been his routine since he was just 16 years old. This month, the 40-year-old Star Circle batch 3 member revealed he had gotten into a freak accident during a recent workout session.

READ: Carlos Agassi says he has adjusted his workout routine for his age

On his Instagram account last December 7, he wrote, “Every week before my birthday, I always get into an accident. I can’t explain if it’s coincidence, bad luck or good luck, a sign or an omen. All I can say is that accidents do happen and it’s called an accident because nobody wanted this to happen. I slipped cause my rubber shoes broke and I face planted.

Last September, Carlos revealed his relationship with a non-showbiz girlfriend Sarina Yamamoto who also helped bring him to the hospital. “Thanks my love @sarinayamamoto for being an angel and coming with me to the emergency rm and not showing me that you were crying.  ️ Thank you Lord I was still conscious to drive to the hospital. Turning 41 this December 12 and will be back on December 11 to have my 6 stitches on my eyebrows and 4 stitches on my gums removed. Thanks to the emergency room doctors and nurses for taking good care of me.   What a learning traumatic experience, I was just walking and smiling in our house gym and next thing I know is that I’m lying on the floor. When I look at the mirror I couldn’t see my face but felt and tasted blood. Stay safe, healthy, and happy. Never take the simple things in life for granted.   Never felt so alive.  ,” he shared.

Launched as a member of the third batch of  ABS-CBN's Star Circle in 1993, Carlos was one of the members of the all-male group known as  "The Hunks" together with Piolo Pascual, Jericho Rotsales, Diether Ocampo, and Bernard Palanca. He got his start on television in 1995 as one of the hosts of ABS-CBN shows like ASAP and Eezy Dancing.