After more than two months of being apart, Jake Cuenca has finally reunited with his girlfriend Kylie Verzosa. 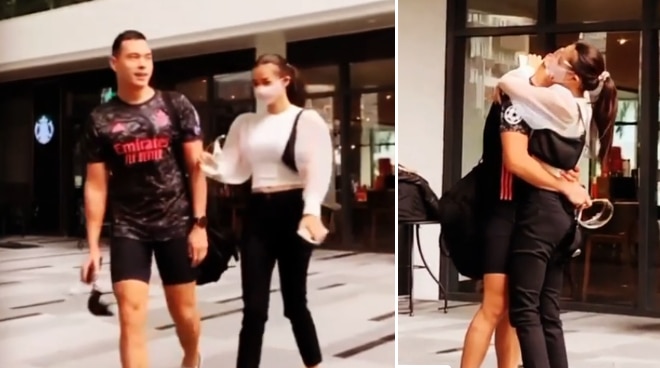 After more than two months of being apart, Jake Cuenca has finally reunited with his girlfriend Kylie Verzosa.

The actor took to Instagram to share his happiness as he posted a video of himself embracing Kylie, who was away for several weeks for the shooting of her new film, Parang Kayo, Pero Hindi.

"When she comes back from work after 2 months and both your swab tests results are negative," wrote Jake in his caption.

In the comment section of his post, Kylie said: "Aww I’m always so grateful for you and for good health. I love you and I missed you boo."

Last October, Jake congratulated Kylie after it was announced that the beauty queen-turned-actress will be doing a new project with Xian Lim and Marco Gumabao, just two months following the successful release of the romance-comedy film Love the Way U Lie, where she played the role of deceased wife Sara.

In an Instagram post, Jake said that he is "so happy and proud" of his girlfriend for her accomplishments.

"Sepanx is real. Words can’t express how much I’m going to miss you while you’re at work but at the same time I am so proud and happy for you in everything you are accomplishing right now," he said.

"When we were starting out you considered me a mentor when it comes to acting and I know you still do but like I told you the other night you are absolutely ready. Get it boo you got this! I want you to know that I’ll always be here to love and support you in whatever you do even when some of those things aren’t exactly my thing. That’s love, you have to learn to adjust and support that person 'cause you know they are passionate about it and that's what I’m doing," he added.

Jake then admitted that the past few months have been "crazy" for him and Kylie.

"We have had our share of good times and bad, but the bad will never outweigh the good. Proud to say we got through this together and if we have gotten through this? We can get through anything together," he said.

"I love you, boo," he went on. "Congratulations on your new projects. Me, Nugget and Leo will be right here waiting for you to come home. Go get em bee boo."

Kylie and Jake, who were paired up in the ABS-CBN series Los Bastardos, officially confirmed their relationship in September 2019. They celebrated their first anniversary as a couple last December.