Sharon Cuneta took to social media to thank her fellow actress Judy Ann Santos for surprising her with a pet dog. 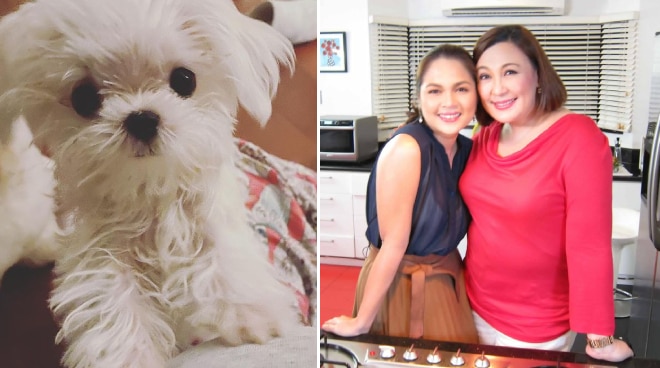 Sharon Cuneta took to social media to thank her fellow actress Judy Ann Santos for surprising her with a pet dog.

On Instagram, the Megastar posted a photo of a white puppy, whom she referred to as Toby, short for Tobias.

"On Nov. 24, a surprise came from my sister Juday. I had no idea and was half-asleep at siesta when my Yaya gently woke me up. She said, 'Ma'am, may surprise po!' With my eyes still closed I asked her, 'Yayie naman, ano 'yon?' Then our Yaya Irish said, 'Ma'am, matutuwa kayo!' So I opened my eyes and there was this doggie crate with a ribbon tied to it with the name Agoncillo!" she wrote in the caption.

Sharon said she named her new pet dog after one of the characters in her favorite political drama series The West Wing.

She went on: "Toby is as long as my slipper and is soooo tiny that I would’ve panicked more if my mini Shih Tzu Wookie hadn’t come 3 weeks before! He is smaller than any dog I’d ever held before Toby came along and I was so careful and scared whenever I held him and whenever he would go to the edge of my bed! So here's Toby!"

Sharon and Judy Ann consider each other as sisters after they became close while doing the movie Magkapatid in 2002.

The two recently opened up about their nearly decades-long friendship in a September 23 episode of Sharon's online show The Sharon Cuneta Show.