Before we leave 2020 behind, let us remember these celebrities who passed away this year. 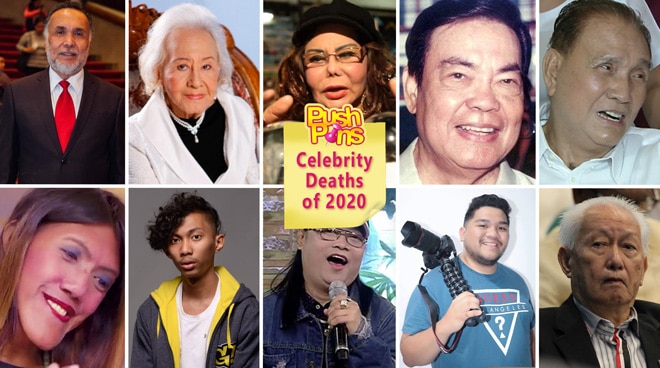 Before we leave 2020 behind, let us remember these celebrities who passed away this year.

At 66, actor Menggie Cobarrubias died last March 26 due to complications from pneumonia.

Five days after his demise, test results showed that he was positive for COVID-19.

Menggie appeared in several Kapamilya shows including ‘Sino Ang May Sala?: Mea Culpa’ and ‘Make It With You.’

Comedia Babajie, whose real name is Alfredo Cornejo, Jr., died last May 4 at the age of 35.

He spent his last moments at a ward in San Lazaro Hospital while fighting pneumonia.

Veteran actress Anita Linda passed away on June 10 at her home in Parañaque City.

Anita became an icon for her great contributions to the film and entertainment industry.

At 95, she was considered the oldest active actress in the local film industry.

At 93, Ramon succumbed to heart failure.

The late actor was one of the showbiz industry’s pillars and was fondly called “Agimat” by the Filipinos.

Former senator and broadcaster Edgardo ‘Eddie’ Ilarde passed away at his home in Makati last August 4. He was 85.

Eddie was among the original hosts of the popular variety show ‘Student Canteen.’

The former politician fought COVID-19 before succumbing to the disease.

The vlogger was admitted to the ICU last August 13 because of kidney failure and blood complications.

It was in May when Emman announced that he has cancer through a YouTube vlog.

Following Emman’s death, another Youtube vlogger has passed away this year.

On September 1, Lloyd was hospitalized after exhibiting COVID-19 symptoms. He took a COVID-19 test on the same day and the result came back positive on September 3.

Madam Auring, who rose to fame as a fortune teller predicting the fortune of many stars and personalities, passed away on October 30. She was 80.

Born Aurea S. Erfelo, she was also an actress who appeared in several local films.

It was in 2009 when the singer was diagnosed with prostate cancer. He later suffered from diabetes, which affected his vision.

Do you miss these celebrities?