Rodolfo Joaquin Diego, the son of Dianne Medina and Rodjun Cruz, has been baptized. 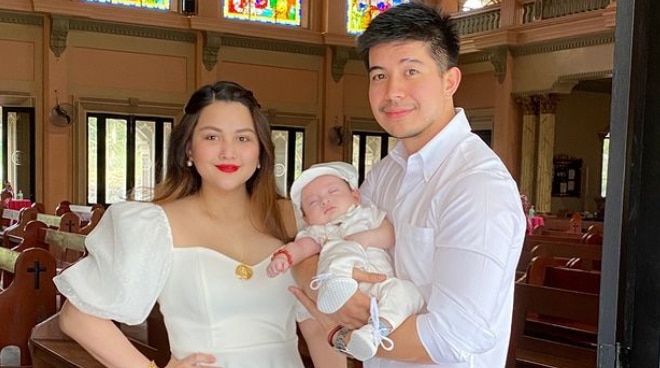 Rodolfo Joaquin Diego, the son of Dianne Medina and Rodjun Cruz, has been baptized.

To make the event even more special, the couple decided to time their baby boy's christening with their first wedding anniversary.

Photos from the ceremony were posted by Dianne and Rodjun on Instagram.

The event was attended by their family and friends, including Rodjun's brother, actor Ravyer Cruz, and Dianne's cousin, beauty queen-turned-actress Maxine Medina.

Dianne, 34, and Rodjun, 33, welcomed their baby Joaquin last September, five months after announcing that they were expecting their first child.

In a vlog, Rodjun had described his son as his "answered prayer."

The couple tied the knot at a church ceremony in the Manila Cathedral December 21, 2019, after being in a relationship for more than a decade.

Last July, the two celebrated their 13th anniversary together.