Aiko Melendez, who turned 45, shares photos and clips of her simple birthday celebration at home. 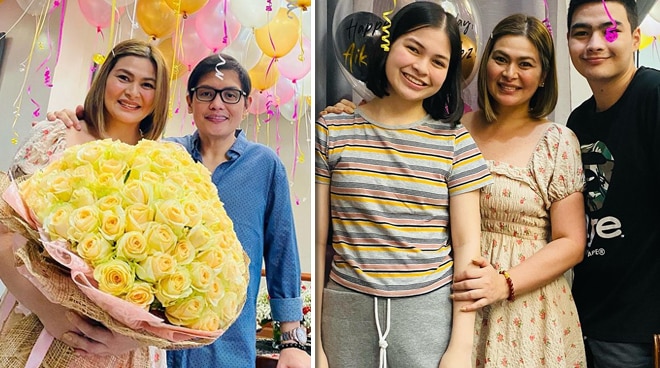 On Instagram, the actress shared photos and clips of her simple birthday celebration at home with her children, Andre and Marthena, and boyfriend, Subic Vice-Governor Jay Khonghun.

"Buo na birthday ko," she said in her post showing her with Andre, her son with actor Jomari Yllana, and Marthena, her daughter from her previous marriage to model Martin Jickain.

In another post, Aiko is seen holding up a big bouquet of peach-colored roses while she posed beside her boyfriend, all-smiles.

"Thank you baby Jay Khonghun for my favorite peach roses. I love you," she wrote in the caption.

The couple recently marked their third anniversary as a couple.

In a previous interview, the actress revealed that she used to ignore Jay's messages, but that changed after they went out on a dinner date.

"From then on, our communication didn't stop na," she said.

Last May, it was rumored that she and Jay had already called it quits. Aiko denied this, saying, “Every relationship has its highs and lows, VG Jay Khonghun and I are not perfect, it may seem and look like it, but just like any ordinary couple we go through tough times and challenges, too."

"But because we choose to stay together and fight for what we have, we are still together till now,” she added.

Recently, Aiko admitted that she and Khonghun have been talking about having a baby.