Rumors romantically linking Julia Barretto and Gerald Anderson have surfaced anew, after a photo of the actress wearing a necklace with a "G" pendant, and snaps of them apparently taken in the same mountain in Tanay, Rizal, circulated online. 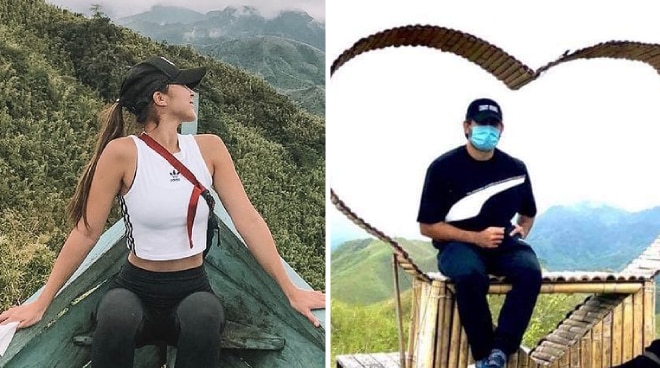 Rumors romantically linking Julia Barretto and Gerald Anderson have surfaced anew, after a photo of the actress wearing a necklace with a "G" pendant, and snaps of them apparently taken in the same mountain in Tanay, Rizal, circulated online.

Last week, Julia shared on Instagram a photo of her promoting a vitamin brand. But instead of the product, fans were quick to see the necklace she was wearing, which they noted had a pendant that seemed to form the letter "G."

In the comment section of her post, some speculated that the "G" stands for Gerald, Julia's leading man in the film "Between Maybes," with whom she was romantically linked last year, amid the actor's controversial breakup with actress Bea Alonzo.

Prior to this, followers of Julia also mentioned Gerald in her recent post showing her posing in a boat on top of a mountain, which many recognized as Mt. Kulis in Tanay, Rizal.

Two days prior to her post, which she uploaded on November 29, a fan page dedicated to the actor posted on Twitter a snap of the actor, with a caption saying it was also taken in Mt. Kulis.

Adding fuel to the fire is Gerald’s brother Ken, who also posted on Instagram videos taken from the same campsite, in which two of the people featured are believed to be the rumored couple, based on their outfits as seen in their separate photos that have gone viral.

In a previous interview with Mega Entertainment, Julia admitted that she is currently "in love," but remained tight-lipped about the identity of the person she is in love with.

Reflecting on her past experience, the actress admitted that it was traumatizing for her to see her previous relationship fall apart in the public eye.

Julia was previously in a relationship her former onscreen partner Joshua Garcia.

Coming from the said experience, Julia said she realized that she needs to protect her peace and privacy moving forward.

"One of the things I made myself confident in when it comes to my personal relationships is that, I’m in control. I am in total control of how much I am only willing to share and how much I am only allowing people to know. I’ve already come to realize how important it is to protect your peace and privacy—and that both go well together,” she said.