Ogie Diaz remains firm with his decision not to feature those who said yes to the shutdown of the Kapamilya network. 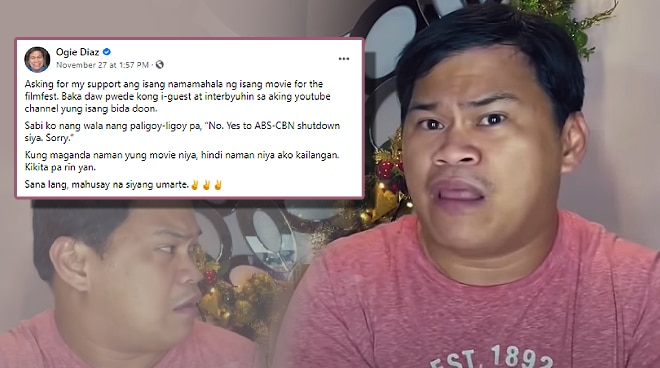 Talent manager and comedian Ogie Diaz shared how he refused to promote in his vlog a movie star because the latter said yes to the shutdown of ABS-CBN.

In his “I-chika Mo Na, Dali!” vlog on his Ogie Diaz Showbiz Update YouTube channel, Ogie relayed that a promo coordinator of the said movie approached him to guest the movie star in his vlog but he said no to the request.

He remarked that he is really firm about this stand and he will not guest those who supported the shutdown of the Kapamilya network.

Ogie did not disclose the identity of the celebrity in question.

This is not the first time that Ogie Diaz discussed the said matter.

In July, the House committee denied ABS-CBN a new franchise, which shut down the media giant’s broadcast operations. Thousands of employees were laid off following the shutdown.