WATCH: Donnalyn Bartolome cries while unboxing items returned to her by ex-boyfriend

In her latest vlog, Donnalyn Bartolome opened up about her relationship with her ex-boyfriend. 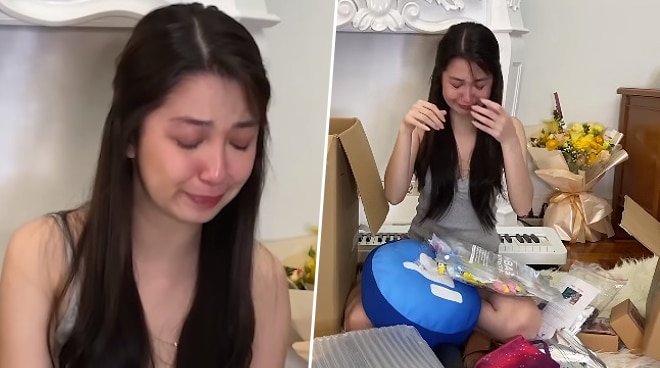 Donnalyn Bartolome could not help but be emotional as she unboxed the items which her ex-boyfriend returned to her.

“Since Araw ng mga Patay ngayon, paglalamayan natin ang patay kong puso. Naiiyak ako agad kasi I have been avoiding this for a really long time. I am unboxing stuff my ex returned to me," she said in her vlog which was posted on November 1.

Donnalyn shared that she has been broken hearted for a long time already but most of her friends didn’t know.

“A lot of my friends, hindi nila alam. They don’t know what I’m going through because, I don’t know, parang everyone’s going through something during the pandemic so parang I just didn’t want to add to it kaya ayaw kong ipaalam sa kanila,” she said.

Some of the stuff that were returned to her were old gadgets, accessories, and cosmetic items, among others.

At one point, Donnalyn cried when she saw the BTS keychains that her ex-boyfriend bought for her sister.

She relayed that she hasn't packed his ex-boyfriend's stuff yet.

"I haven't packed yung sa kanya. I feel like I am not ready. But I'm gonna have to be ready soon because it's been six months," she said.

Donnalyn shared that they were on and off together for almost 5 years.

It’s my first time being open about my broken heart by unboxing things my ex returned to me on the day of the dead.. a day for my now seems lifeless heart. to D’ex, though I hope you wait another 6 months before replacing me haha, I still wish you find the right one who can give you everything I can’t. I’m sorry what I could give wasn’t enough. 😔 I’m sorry for not being enough or not being the right one for you. I tried even if it meant I would lose myself.. because the happiness you brought into my life was such a blessing.. I prayed about you everynight, thanking Him for bringing you into my life. Your existence and your love was what helped me keep going when I wanted to give up. That’s why I love you enough to let you go.. I’m sorry for everything and I want you to know I’ve always forgiven you before you said every sorry in our almost 6 years of knowing each other. Always. I now accept that the kind of love I give isn’t right for you.. for us. It might not be the right kind but it’s true. I didn’t know peace would cost this much.. 😔 and I don’t know when I’ll breathe again or when I’ll stop missing you.. or think of you.. all I know is I don’t want to ever see us hurt each other again and though I’m terrified I’ll regret leaving, if it means you’ll find The One I was trying to be for years, then I’ll be bitter and angry hahaha jk. I know I’ll be okay because my love for you is true and true love is when you want the one you love to be happy even if it means it’s not with you. P.S. SO-EN Panties!? Really?? 😒 (Link in bio for the vlog)

A post shared by Donnalyn Bartolome🇵🇭 (@donnalynbartolome) on Nov 1, 2020 at 5:00am PST

On why their relationship did not work out, she relayed, “It's just our relationship was so complicated that we tried several times and everytime naman I feel like I'm loved better but I realized kasi there are things in my life that just don't fit sa life niya. We tried to make it work but we just ended up hurting each other. And I'm crying right now [dahil] ako kasi ‘yung nag-decision na okay, we really can't do this.”

READ: Donnalyn Bartolome reveals her recent heartbreak: ‘I’m sorry for not being enough’

However, Donnalyn admitted that it is actually harder to let go than to hold on.

“I know to a lot of people, they say, that being with someone is a choice. I've chosen to be with this person for a long time. But it's just we loved each other but we weren't right for each other. They say that it's hard to hold on. I feel like it’s much harder to let go. Letting go of the hope that you two are right for each other is so difficult,” she stated.