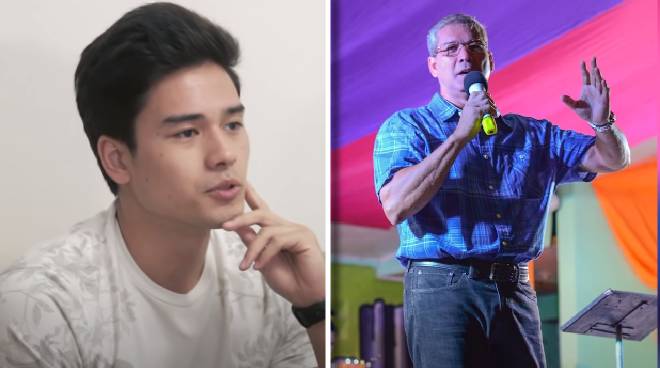 In his most recent vlog posted last November 28 “My Family, My Story,” Marco Gumabao opened up about how he felt when his father, former actor Mitchell Gumabao (screen name: Dennis Roldan) was first arrested for the kidnapping of a three-year-old boy in 2005. In the video posted on his YouTube channel, Marco shared that he and his family never allowed themselves to be interviewed all together about what happened to their father when Marco was just 10 years old. The Kapamilya actor revealed how 20 to 30 heavily armed policemen raided their home to arrest his dad that early Sunday morning in 2004.

The 26-year-old actor admitted that because of that experience, their entire family became Christians. Marco also revealed that he and his siblings experienced bullying in school because of the incident and even up until today there are bashers who use their father’s conviction against them. “Nung nasa school kami it was really a hard time for us. Kasi siyempre yung mga tao, yung mga kaklase mo, sasabihan ka, ‘Ah yung tatay mo kidnapper.’ Aasarin ka talaga. Yung tatay mo nasa kulungan. Yung tatay mo kumbaga criminal. Ganun yung mga naririnig namin siyempre until now. May mga haters pa rin diyan na ibabalik nila kung anong nangyari [2005].”

Marco shared that despite all they went through, he and his family have become closer and stronger because of the whole experience. “You can’t really run away from your past. But the best thing to do is how you can show people that what happened to your past became a blessing sa future mo. Blessing pa rin for us kasi alam ni God na matibay kami. Itong ganitong klaseng tragedy na nangyari sa fmaily namin, it all made us stronger, it all made us gel together more. Kumbaga nagka-foundation kami, daddy namin naging pastor sa loob ng kulungan. The first year na nandun siya na-Born Again siya sa kulungan. That for us was the biggest turning point of our lives,” he added.

In the vlog, Marco clarified that he and his family were not defending his father. Last 2018, the Court of Appeals upheld the conviction. Marco’s father is currently serving his life imprisonment sentence at the New Bilibid Prison Aside from his two sisters Gita and Michele who joined him in the vlog, Marco also shared that they have three half-brothers and two more sisters who are currently in the US.