Female Stars in their 30s: Their First vs. Latest TV Roles | Push Pins

Throwback time! Let’s take a trip down memory lane and have a peek of our favorite 30-something female celebs in their first on-screen roles. 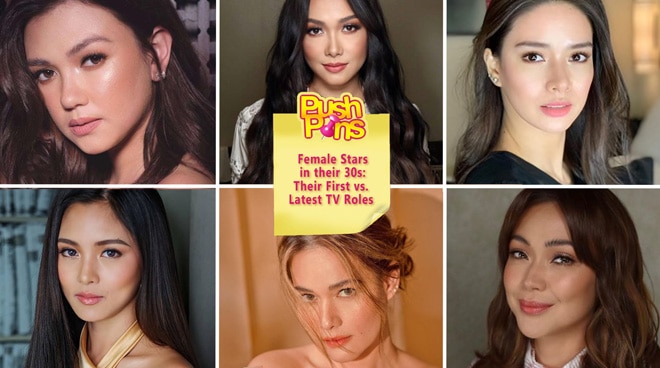 It was in 1999 when Jodi Sta. Maria took on her first on-screen role as Gretchen in the youth-oriented show ‘Gimik.’ More than two decades later, Jodi is among the country’s A-list actresses and currently appears as Marissa Pineda in the drama ‘Ang Sa Iyo Ay Akin.’

Angelica Panganiban rose to fame as a child star in the 90s. Her first TV appearance was in the youth-oriented show ‘Ang TV.’ Since then, Angelica has been getting major roles both on film and TV. She currently stars in the drama ‘Walang Hanggang Paalam.’

After emerging as the Big Winner in Pinoy Big Brother, Kim Chiu started receiving projects in the Kapamilya network. Her first on-screen role was Baby Girl in the love anthology series Star Magic Presents: Ang Lovey Kong All Around. Meanwhile, her latest role was Jia Wong in the drama ‘Love Thy Woman.’

Before she became the country’s ultimate bida-kontrabida, Maja Salvador had a humble beginning in showbiz. On her first acting stint on-screen, she took on a supporting role in the 2003 drama ‘It Might Be You.’ More than a decade later, she has become a household name, starring in top-rating shows. Her latest role was Camilla Dela Torre in the 2019 drama ‘The Killer Bride.’

Bea Alonzo’s first role on TV was already quite a major one. She played Dianne in the youth-oriented show ‘K2BU.’ Today, Bea remains among the biggest names in the showbiz industry. Her latest on-screen role was Andeng in the 2017 drama ‘A Love to Last.’

More than 16 years ago, Erich Gonzales entered showbiz after joining the reality talent search competition ‘Star Circle Quest.’ After SCQ, she appeared in the sitcom ‘Ok Fine ‘To Ang Gusto Nyo.’ She has since received several roles on both film and TV. Her latest role was Lena in the 2020 teleserye ‘La Vida Lena.’

Who among these female stars is your favorite?