Why does Pia Wurtzbach think Rabiya Mateo is already ‘on the right path?’

Rabiya Mateo tells Pia Wurtzbach that she will start training soon for the Miss Universe pageant. 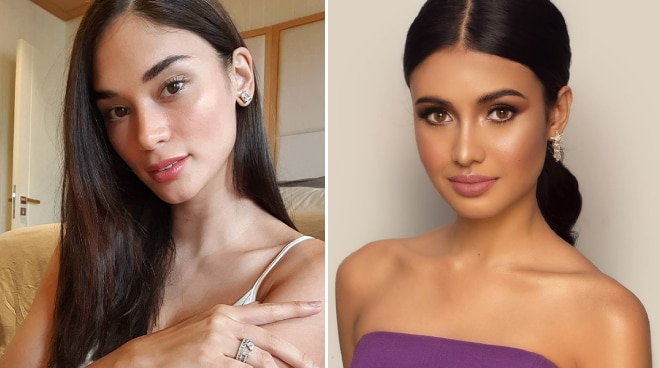 Pia Wurtzbach was all praises for Rabiya Mateo for her self-awareness. The two beauty queens talked virtually via the pageant-themed show "Queentuhan" alongside Bianca Guidotti and Carla Lizardo on Tuesday, November 24.

“Parang na-notice ko sa 'yo na sobrang open mo to learning and inoobserbahan mo rin 'yung sarili mo na, 'Ito dapat gawin ko, ganito, ganyan,' which is so good and so important for a person who wants to keep improving and wants to win," Pia added.

The Miss Universe 2015 remarked that Rabiya is "on the right path."

"I think you're on the right path already, Rabiya. You don't need a lot of work. What I mean [by] work, alam mo 'yung parang may mga babaguhin pa sa way of thinking mo or training mo," Pia said.

Rabiya shared that she will begin training soon. One of the aspects she will focus on her training will be her physique.

"I want to have the best body. Iyon sana, that's my target. I'm aware that my frame is kind of small. And 'yung mahirap kasi sa akin, even though I eat a lot, hindi ako lumalaki. So I really need to hit the gym and to have those weights. Right now sinasabi we have this target na arms, hips, body," Rabiya relayed.

The newly crowned Miss Universe Philippines said that she wants to train hard because she will be representing the Philippines.

"And sabi ko nga, nai-inspire ako to do that kasi I know myself, I'm not going to settle for less. I'm going to push myself to improve kasi Pilipinas na 'yung dala-dala mo eh," she remarked.

There is no exact date for the Miss Universe pageant yet but Rabiya has already been getting in touch with the other candidates. She shared that she is frequently talking to Miss India.

"Meron na po kaming WhatsApp na group, kami pong lalaban for Miss Universe 2020... Pero as of the moment po 'yung nakakausap ko talaga is si Miss India kasi napakabait niya. And maybe because I'm also half-Indian and I'm looking for my dad, so somehow we have this connection. But I'm excited to meet all of the girls," she stated.

Rabiya was crowned as the new Miss Universe-Philippines on October 25.