See the reaction of Zia Dantes when she was greeted by one of her idols on her birthday. 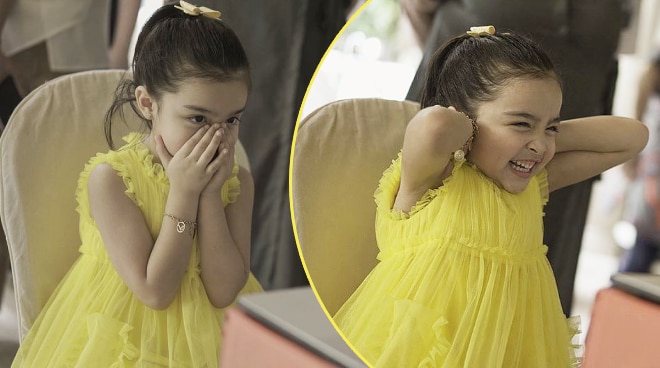 Dingdong Dantes and Marian Rivera's daughter Zia was on cloud nine when one of her biggest idols greeted her on her birthday.

Dingdong shared that Zia was greeted by the media personalities she admires. According to the actor, it was Marian who reached out to the said celebrities for the birthday greetings.

One of the stars who greeted Zia was Sarah Geronimo.

"The progression of her kilig when we made her watch the birthday greetings of her most admired media personalities. Thanks to Mama for organizing and reaching out to them. #SarahG #RanzNianaAndNatalia #KayceeAndRachel," Dingdong wrote on his Instagram page accompanying various happy snapshots of Zia while watching the video greetings on a laptop.

Meanwhile, to mark the occasion, Marian wrote a heartwarming message for her daughter on Instagram.

"Happy birthday Ate Z! I was so touched when she told me this morning that her wish is to keep her family, friends and everyone she knows safe and for the World to be healed. awww  ," she posted.

"Thank you for being such a thoughtful daughter, mama is always here to protect and support you all the way... Happy Birthday Anak! Mahal na mahal ka namin. #HappyBirthdayAteZia," she added.

Marian also expressed how proud she was of her daughter who made a touching birthday wish.

Zia is the eldest child of Dingdong and Marian.