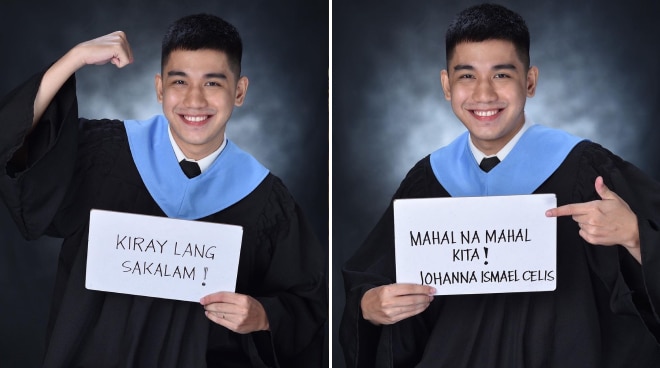 Netizens couldn’t help but feel kilig over Kiray Celis and her boyfriend Stephan Estopia who once again proved that their relationship is #goals seeing how the young comedienne’s beau showed his affection toward her in some graduation photos.

The former Goin’ Bulilit star herself couldn’t help but feel giddy about her boyfriend’s photos who graduated at the Arellano University.

“Kiray lang sakalam,” wrote her boyfriend on a whiteboard he was holding in his graduation photo.

In another photo, Stephan can be seen holding another whiteboard with the message ‘Mahal na mahal kita Johanna Ismael Celis’ written on it.

In a tweet last June, Kiray explained why she often posts photos of herself with Stephan on social media.

Kiray, who turned 25 last July 29, received special gifts from her boyfriend during her birthday. In an unboxing video shared on social media, Kiray shared her reaction when she saw a gold necklace inside a small box which she initially thought contained a simple gift.

READ: Kiray Celis receives a special gift from her boyfriend on her 25th birthday

It was in 2019 when Kiray confirmed her relationship with Stephan.

Kiray opened up said she and her boyfriend were both heartbroken when they first met each other.

According to Kiray, her ex-boyfriend left her for another girl while Stephan just came from a failed relationship at that time.