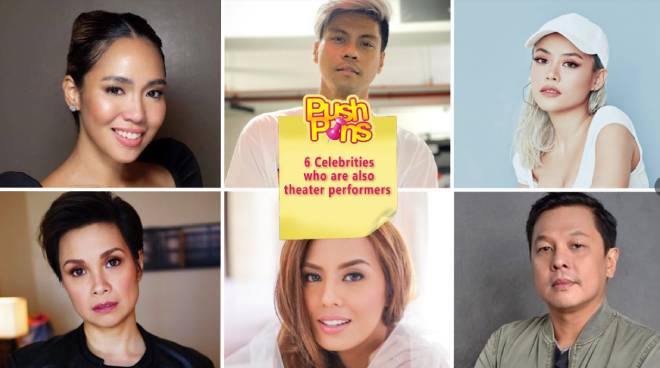 They thrive not only on-screen but also onstage. Let’s get to know these charming and talented Filipino celebrities who are here to steal the scene on the theater stage.

Theatre has always been Nikki Gil’s passion. Before she rose to fame as a television actress, she’d always audition for various roles in plays. In 2007, she became part of Seussical the Musical. Then, in 2010, she landed the title role in Legally Blonde, The Musical. She later did several plays including The Last 5 Years.

A globally-renowned theater actress, Lea Salonga started her career in musical theater. At 18, she took on the lead role of Kim in Miss Saigon. She also became part of the Broadway musical Les Misérables. Over the years, Lea has continued to perform onstage. Among her notable performances were Into the Woods, Flower Drum Song, Cats, and Allegiance.

Jerald Napoles got into theatre when he landed a role in the school play Jesus Christ Superstar. Then, he became part of Dulaang UP’s St. Louis Loves Dem Filipinos and Zsa Zsa Zaturnnah Ze Muzikal. In 2010, he got his big break when he landed the role of Jograd in Magsimula Ka. He later continued his theater career as a professional and took on roles in various plays including Noli Me Tangere and Rak of Aegis.

Born to a family of musicians and performers, talent runs in the blood of Kim Molina. As a kid, she would take part in school plays and later started her training to pursue theater professionally. In 2013, she became part of Disney’s Tarzan The Musical and Carrie The Musical. Later in 2014, she landed her breakthrough role as Aileen in Rak of Aegis. Her outstanding performance in the play earned her the Best Actress in a Musical award in Gawad Buhay.

Known for fronting the local rock band The Dawn as a singer and guitarist, Jett Pangan proved he could offer more. Already juggling his time between touring and recording, Jett was able to fit in his acting career when he joined the cast of the rock opera Jesus Christ Superstar in 2001. He also became part of Jekyll and Hyde and Nine. In 2019, he got his theater breakthrough after landing the titular role in Sweeney Todd: The Demon Barber of Fleet Street, starring alongside Lea Salonga.

It was in 2013 when Aicelle Santos debuted in the theatrical scene via Katy! The Musical as the young Katy Dela Cruz. Since then, she has taken on major roles in various plays. In 2014, she landed the lead role in Rak of Aegis. She later became part of Lino Brocka’s Maynila Sa Mga Kuko ng Liwanag and bagged the 2017 Aliw Award for Best Actress in a Featured Role. Then, in 2018, she played the lead character Elsa in Himala: Isang Musikal and also bagged the role of Gigi Van Tranh in the hit musical play Miss Saigon.

Have you seen these celebrities in theater plays?