Back with a new single called ‘Fallin,’ American boy band Why Don’t We talked about their latest endeavors, including encouraging fans to vote. 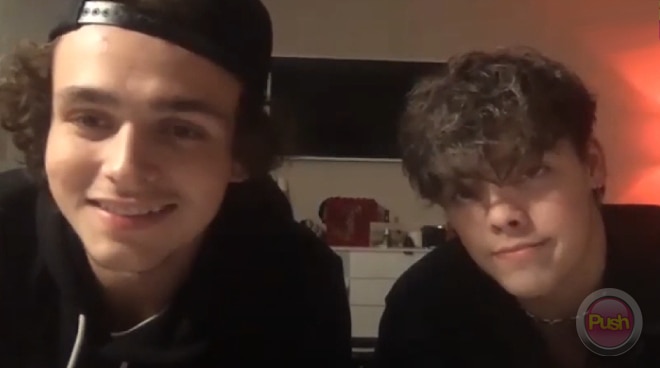 American boy band Why Don’t We is back on the music scene with a new single called “Fallin.” Band members Jonah Marais and Zach Herron shared what their new song is all about in an episode of the online show PUSH Bets Live.

“’Fallin’ is sort of about that time in our lives where you’re kind of at the beginning of a relationship and there’s that moment of, you know, you have to commit or you don’t have to commit. It’s about sort of that moment of committing and feeling how it kind of gives you that rush of adrenaline… When you’re like ‘I guess we’re going to go for it.’ That’s what ‘Fallin’ is about,” said Jonah.

This was sort of a comeback song following the band’s social media hiatus, which they shared along with the story behind the movement #WhereIsWDW.

“We took like eight months away from social media completely. So we were just sort of working on music, working on the album. And then you know, COVID happened so it got pushed back even more. And so there’s a long time there where we hadn’t talked to fans or been interactive at all. So, we sort of used that #WhereisWDW as fans kind of guessing where we were, when we were coming back. We went out to dinner and wore these masks with like a question mark on it. It’s almost like a game with our fans and they had to figure out what was going on. That was the lead up to ‘Fallin,’” said Jonah.

And now that they are back, the band has partnered with HeadCount and Atlantic Records’ task force ATL Votes to encourage their fans to practice their right to vote.

“I think it’s the most important thing you can do really is practice your right [to vote] because you know, that’s your role in society. You should care about your future for you and your kids one day, and your family, and your friends around you. You should be voting for people who are going to affect you guys in the best way. So, we felt it was really important to partner up with HeadCount and Atlantic and get the word out there. We got a lot of people registered. It felt really good,” said Jonah.

Meanwhile, aside from “Fallin,” Why Don’t We recently announced their sophomore full-length album titled The Good Times and The Bad Ones, which is set to be released on January 15, 2021. It is now available for pre-order via https://whydontwe.lnk.to/TGTATBO.

Aside from Jonah and Zach, other members of Why Don’t We include Corbyn Besson, Daniel Seavey, and Jack Avery.