Actress and model Isabelle Daza does her part to help raise donations for those affected by typhoon Ulysses in the country. 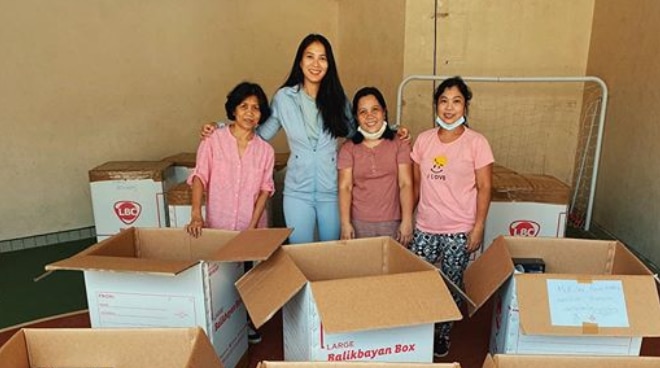 Barely three days after typhoon Ulysses first struck the country, devastating several areas in and outside Metro Manila, different personalities have come forward to do their part to help no matter where they are in the world. Among them is Isabelle Daza-Semblat who is now staying in Hong Kong with her family. The 32-year-old actress shared how she spent the weekend collecting donations to be sent back to the Philippines as relief goods.

On her Instagram account, she wrote, “Spent the weekend collecting relief goods for our kababayans displaced by Typhoon Ulysses. So grateful to everyone who came to help & donated  🏽 when I asked the aunties (with me jn the photo) what they wanted for lunch they replied ‘just donate that money to the victims’  🤯 I choked up with a lump in my throat—This is what makes me so proud to be Filipino. It is so inspiring to see how selfless and generous our countrymen are not only with donations but with their time (and on their days off.)   🇵🇭 maraming salamat po sa inyo 🏽 most especially thank you to LBC for not even hesitating and saying yes immediately to sponsoring the shipment of these boxes.  ”

Belle has been Hong Kong-based since the start of the quarantine period earlier this year. She briefly returned to the country last September to spend time with her mom Gloria Diaz and was also seen doing television guestings before returning to HK. She married French businessman Adrien Semblat in 2016. The couple have a two-year-old son named Baltie.